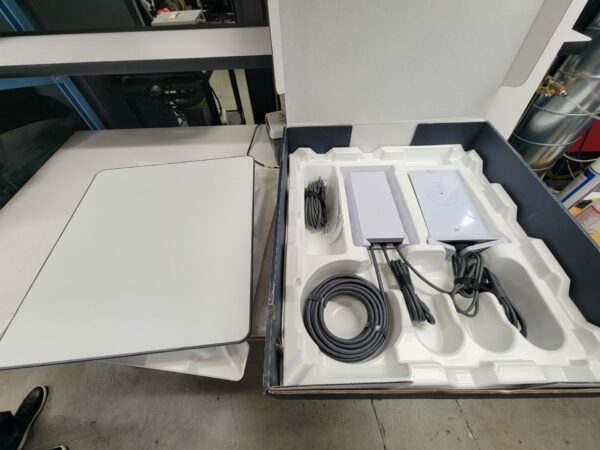 After SpaceX unveiled its Starlink RV mobile internet service earlier this year, one customer of the company is showing off the contents of the order.

SpaceX’s Starlink RV internet kit was spotted being unboxed on Monday, showing the next-generation terminal as it comes from the company (via Reddit).

The photo shows the RV kit sitting in the opened box, showing the boxy terminal and the router in their compartments of the package and with cables running between them both.

The user noted that the mobile Starlink kit will be used during rural exploration while working on paleontology projects, which often brings them to places beyond cell coverage.

Another user in the thread asked if the second smaller box was an Ethernet adapter, noting that their own ordered kit didn’t include the hardware. In response, the original poster explained that the Starlink RV kit is a “new class of device,” designed for use in moving vehicles.

The news comes as Starlink launched a “first-month free” promo for RV customers in the U.S., also offering discounted pricing on hardware in Canada.

Users in Europe have praised the Starlink RV system for outpacing mobile internet speeds by a degree of 100.

Starlink RV also hit 100,000 customers in October, just as the company launched its first services in Asia in Japan.

SpaceX has launched a new feature for the Starlink app version 2023.03.0 called “sleep schedule,” which is intended to help save energy during normal sleeping hours (via @Nathan Owens). The feature toggles a power-saving mode, causing the dish to report an outage reason as “Sleeping” during the pre-set hours. The update also included the addition […]
Peter McGuthrie
5 hours ago

SpaceX launched 56 Starlink satellites on Thursday morning via its Falcon 9 booster, with a payload weighing over 17.4 metric tons making it the heaviest payload ever flown on the latter. On Thursday, January 26 at 4:22 a.m. ET, Falcon 9 launched 56 Starlink satellites to low-Earth orbit from Space Launch Complex 40 at Cape […]
Peter McGuthrie
6 hours ago