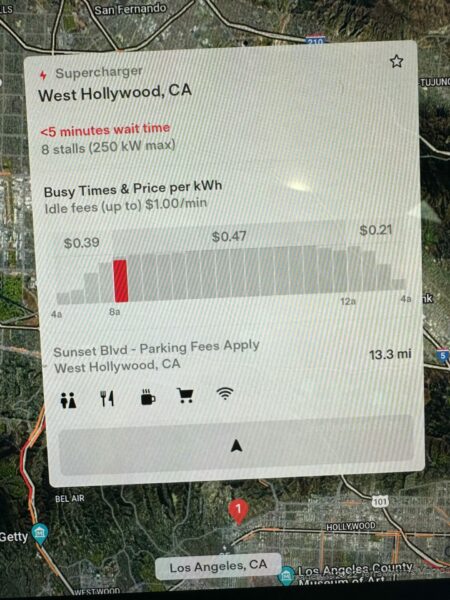 The price of charging an electric vehicle (EV) can fluctuate significantly, and a recent update to some Tesla Supercharging shows the company offering more affordable peak pricing than in the past.

Tesla has cut Supercharging prices throughout much of Los Angeles and other parts of Southern California, as spotted by @BLKMDL3 and shared in a tweet on Wednesday.

The tweet includes a screenshot of a Supercharger location in West Hollywood from the vehicle’s infotainment screen, showing that some charging prices are as low as $0.05/kWh cheaper even during peak hours.

In the thread, @BLKMDL3 also pointed out that the West Hollywood Supercharger was less than ideal, saying that there’s always a line and the site has only eight charging stalls.

Still, he also writes that some Superchargers in the area actually increased pricing, while some users noted that pricing was cut for chargers in their areas too.

As Tesla often does around the holidays, the company is offering free off-peak Supercharging at select locations for Thanksgiving in many parts of California with a few other areas in Nevada, Oklahoma and Texas also gaining the deal.