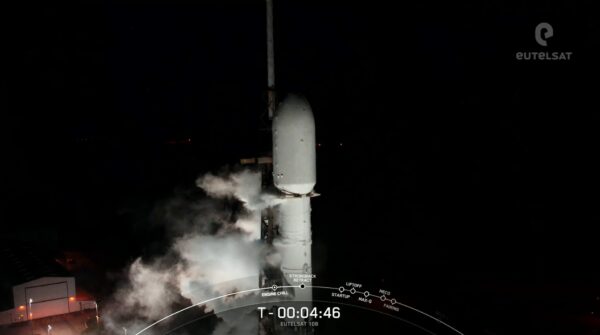 Along with its own Starlink launches, SpaceX also provides launches for several other companies, government agencies and more. In one such launch, the company successfully launched a satellite for Eutelsat into geosynchronous orbit on late Tuesday evening.

SpaceX successfully launched the Eutelsat 10B mission on Tuesday using its Falcon 9 booster. The first stage was not recovered and was expended this time, due to maximizing all fuel to send the satellite to its destination.

This also marks the fourth launch for Eutelsat in just three months, all of which have been performed by SpaceX. The 10B satellite is expected to play an important role in Eutelsat’s connectivity worldwide, guaranteeing connections in global markets.

SpaceX launched the Eutelsat HOTBIRD 13F satellite into orbit using Falcon 9 just last month, catching the first-stage booster with its Just Read the Instructions droneship. While SpaceX catches and reuses the vast majority of its Falcon 9 boosters, this particular unit was expended after its 11th launch.

You can watch SpaceX’s full launch of the Eutelsat 10B mission below.

Starlink, SpaceX’s low-Earth orbit satellite internet service, is offering increased internet access in many rural regions where residents do not currently have stable connectivity, and the company has just become operational in one new island country. SpaceX’s Starlink satellite internet is now available in Haiti, as the company has officially been registered as “Starlink Haiti […]
Peter McGuthrie
15 hours ago