Tesla Sends Out AI Day Invites Ahead of Sept. 30 Event 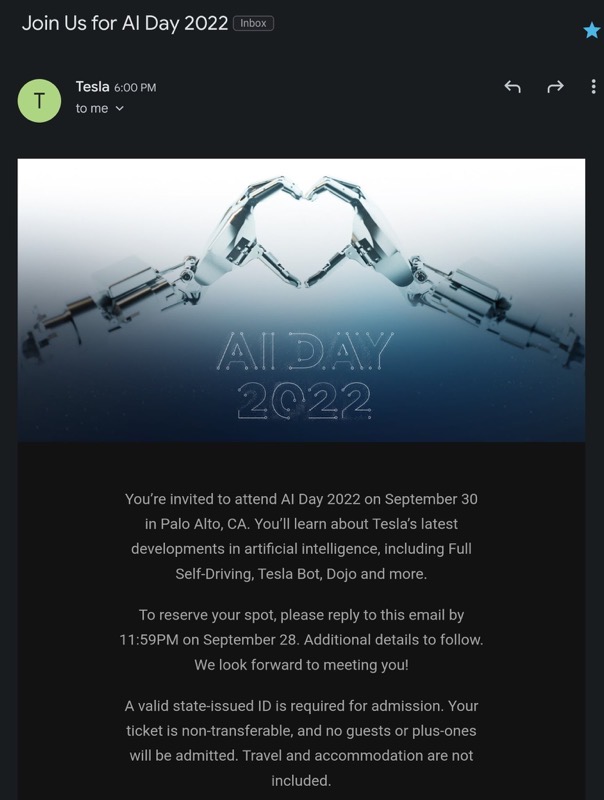 Tesla has started sending out invites to select customers and supporters for its annual AI Day, set for September 30, 2022.

According to screenshots of email invites shared by Tesla owners online, including @DirtyTesla, the invites read, “You’re invited to attend Al Day 2022 on September 30 in Palo Alto, CA.”

Those interested in attending are told, “to reserve your spot, please reply to this email by 11:59PM on September 28.” Tesla says more details will follow.

“We look forward to meeting you!”, writes Tesla, with the email adding a valid state-issued ID is required for entry. Tickets are also non-transferrable, and no guests or plus-ones are allowed. Travel and accommodation are not included as well.

Tesla CEO Elon Musk has said the company will demo a prototype of its Tesla Bot, with members of its Autopilot teams working on the project, which looks like it’s straight out of the Skynet playbook.

The electric automaker will likely once again live stream AI Day on the internet for the world to watch the event. Stay tuned for more details.