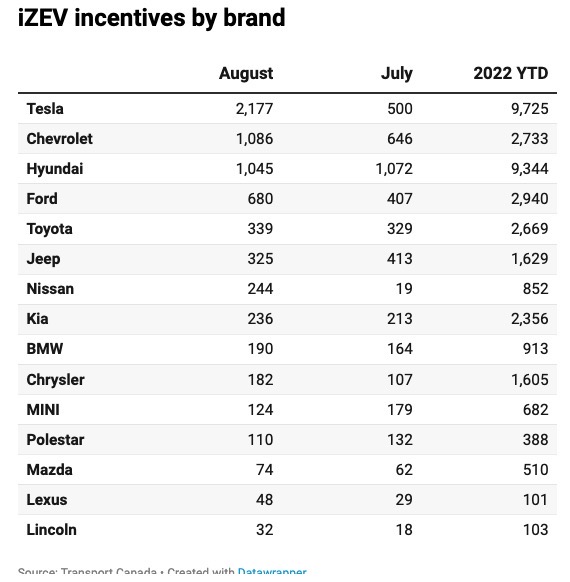 Tesla delivered 2,177 Model 3 vehicles in Canada last month, out of 6,956 battery electric and plug-in hybrid vehicles in the country for August 2022.

According to Transport Canada data, Automotive News Canada reports Tesla was the biggest volume brand under the federal EV rebate program, which offers $5,000 CAD for eligible vehicles. The iZEV program is limited to vehicles priced up to $55,000 CAD.

Tesla recently increased the prices of its entry Model 3 so it no longer qualifies for federal rebates. But these orders are from customers that have been waiting for their Model 3 to be delivered, and that qualified for iZEV before price increases.

To date, Tesla has shipped 9,725 Model 3 vehicles to Canada. Tesla regained its lead after being passed by Hyundai two months ago.

As for plug-in hybrid EVs, the federal rebate program was led by deliveries of the Jeep Wrangler 4xe PHEV.

Quebec led iZEV incentives by province with 3,518 rebates submitted, followed by British Columbia at 1,669 and Ontario with 1,373 rebates.