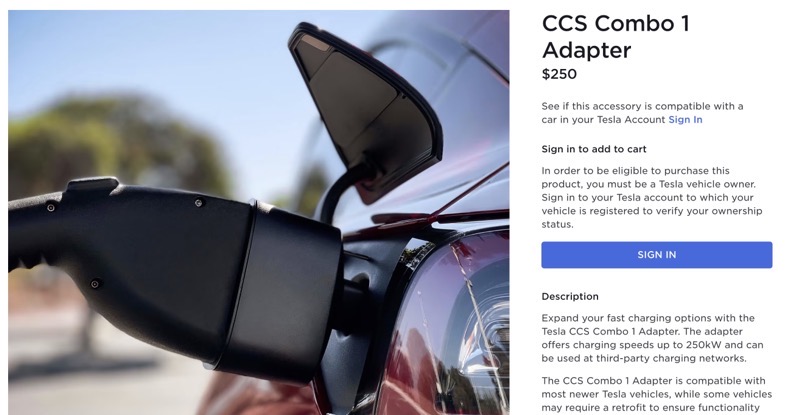 Tesla has launched online sale of its CCS Combo 1 Adapter in the U.S., priced at $250 USD. Previously, this accessory for CCS-enabled vehicles was only available in South Korea. The adapter is $325 in Canada.

“Expand your fast charging options with the Tesla CCS Combo 1 Adapter. The adapter offers charging speeds up to 250kW and can be used at third-party charging networks,” says Tesla.

“The CCS Combo 1 Adapter is compatible with most newer Tesla vehicles, while some vehicles may require a retrofit to ensure functionality with third-party CCS stations. We recommend checking that your vehicle is on the latest available software prior to signing in to your Tesla Account to verify vehicle compatibility,” reads the product description.

This means a retrofit option is coming for CCS for older Tesla vehicles in 2023, for Model S/X and Model 3/Y, says the company.

Shipping will start within two weeks of ordering the CCS Combo 1 Adapter.

You can check if your Tesla vehicle supports CCS by going to Controls > Software > Additional Vehicle Information and you’ll see if CCS is “enabled” or not.