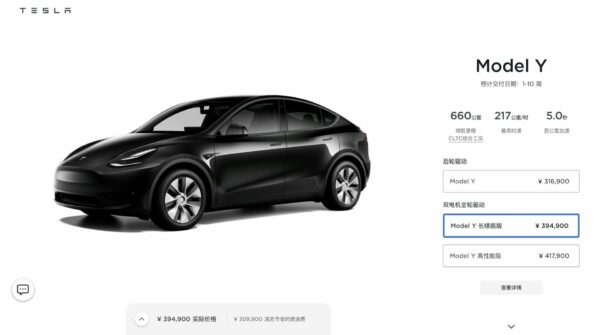 Tesla has cut down its wait times for buyers in China once again, this time dropping all models to start at a wait time of one week, according to CnEVPost.

The entry-level Model Y dropped to a wait time of 1-4 weeks earlier this month, and remains at this estimated delivery timeline after Tesla’s most recent cut in wait times.

Following the production upgrades at Giga Shanghai, Tesla tripled its deliveries in August compared to its July deliveries.

A report on Thursday claimed that Tesla plans to close some of its more expensive showrooms in larger cities and focus on more affordable, suburban locations in a shift of retail business strategy.

The Motortrend crew recently visited Frito-Lay’s upgraded, zero-emission distribution center in Modesto, California to talk with Tesla Semi drivers and see the truck in person. The publication was able to gather a few extra specs on the Tesla Semi, noting that the huge vehicle sported a Model S Plaid tri-motor powertrain but turned around the […]
Peter McGuthrie
6 mins ago

Here’s a list of all the new Tesla Superchargers that opened up across the globe between January 19 and 25, 2023, courtesy of data from Supercharge.info and the TMC Forums: Date Opened Location Number of Stalls Power Rating Official Listing January 19, 2023 The Village at Sandhill at 494 Town Center Pl, Columbia, SC, USA 12 250 […]
Nehal Malik
17 hours ago

Tesla announced its fourth-quarter and full-year 2022 earnings on Wednesday afternoon, reporting record revenue for the final quarter. The automaker reported revenue of $24.3 billion USD for October to November 2022, up a whopping 37% year-over-year. Wall Street, meanwhile, had forecasted $24.03 billion in revenue. Tesla reported a net income of $2.3 billion (GAAP) for […]
Nehal Malik
20 hours ago