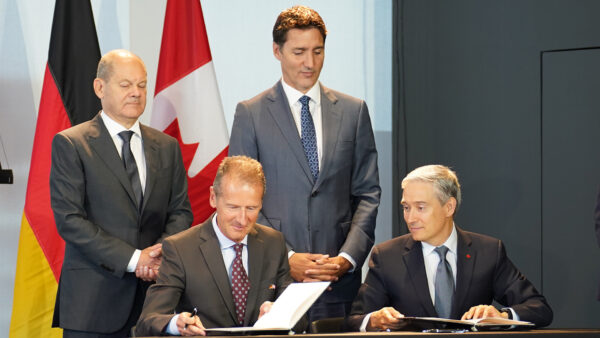 After news broke that Volkswagen and Mercedes would be signing a trade deal with Canada, an officially signed a memorandum of understanding to solidify tariff-free raw materials contracts was announced on Tuesday.

The memorandum of understanding was signed on Tuesday in Toronto by Volkswagen CEO Herbert Diess and Canadian Minister of Innovation, Science and Industry François-Philippe Champagne. Additionally, German Chancellor Olaf Scholz and Canadian Prime Minister Justin Trudeau were both in attendance.

In a statement, Champagne said, “Canada is quickly becoming the green supplier of choice for major auto companies, including leading European manufacturers, as we transition to a cleaner, greener future. By partnering with Volkswagen, Canada is strengthening its leadership role as a world class automotive innovation ecosystem for clean transportation solutions. Canada is committed to building a strong and reliable automotive and battery supply chain here in North America to help the world meet global climate goals.”

The news comes as Diess prepares to depart Volkswagen, with plans for Porsche head Oliver Blume to take over.