Tesla Mobile Connector with NEMA Adapters Back in Stock 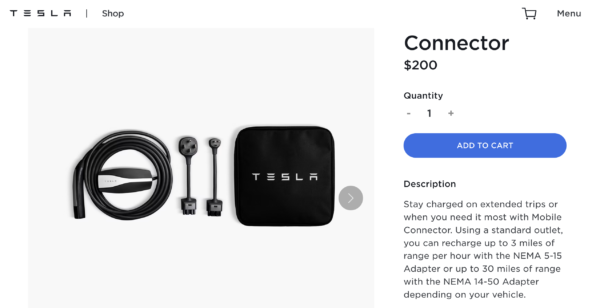 The Tesla web store recently re-stocked the mobile connector, which can be a useful tool for keeping your vehicle charged on the go or at home.

Tesla’s mobile connector is now back in stock for $200 on the company’s online store, including NEMA 5-15 and 14-50 adapters for charging with household outlets.

Tesla stopped providing the mobile connector with vehicles ordered in April, but later launched the item for $200 on its online merch shop. The item has periodically been sold out, most recently being re-stocked at the end of July.

After a Delaware judge set Tesla CEO Elon Musk’s deposition for this week, the opportunity for the billionaire to answer questions under oath has been pushed back to next week. Musk’s deposition for an upcoming trial with Twitter has been rescheduled to October 6 and 7, according to a filing with the court on Tuesday […]
Peter McGuthrie
5 hours ago

Although Tesla CEO Elon Musk has previously said he hopes to shift away from end-of-quarter sales pushes, the automaker is expected to have another huge batch of deliveries heading to customers to end the third quarter. Musk apparently sent an email to employees requesting help for a “very high volume” of third-quarter deliveries, and analysts […]
Peter McGuthrie
6 hours ago