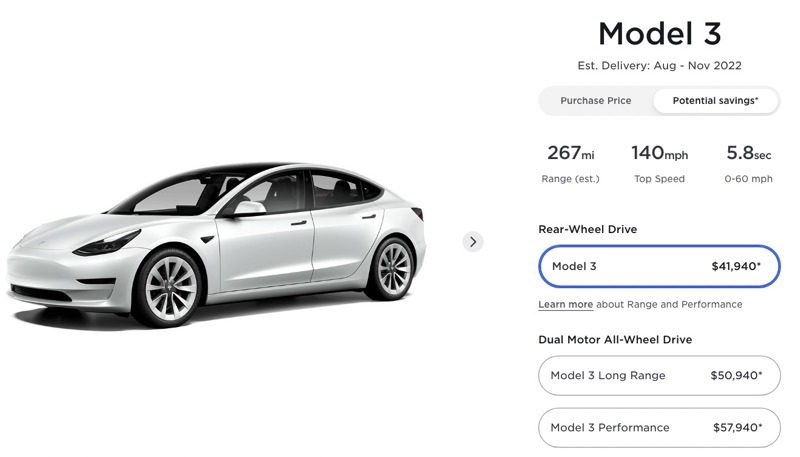 Tesla’s estimated delivery dates for its Model 3, Model S and Model X continue to slip further into 2022 and 2023, depending on configuration (via @SawyerMerritt). Check out the changes below:

During Tesla’s Q1 2022 earnings call, CEO Elon Musk said the company was production limited and not demand limited. Musk said recent price increases were made to anticipate what it would cost to make a car over the next 6-12 months.

“Actually, on the price increase front, I should mention that it may seem like maybe we’re being unreasonable about increasing the prices of our vehicles, given that we had record profitability this quarter, but the wait list for our vehicles is quite long,” said Musk.

“And some of the vehicles that people will order, the wait list extends into next year. So, our prices of vehicles ordered now are really anticipating supplier and logistics cost growth that we’re aware of and believe will happen over the next 6 to 12 months. So, that’s why we have the price increases today because the car ordered today will arrive, in some cases, a year from now. So, we have a very long wait list, and we’re obviously not demand-limited. We are production-limited by — very much production-limited,” explained the Tesla CEO.

Essentially, if you want a Tesla, you should place an order now because wait times aren’t getting any better. The global chip shortage remains and supply chains continue to be backlogged for all automakers, but it seems Tesla is able to weather the storm better than others.

China’s new-energy vehicle (NEV) sales dropped in the last week of November, as was measured by insurance registrations. BYD with its hybrid electric vehicles doubled Tesla’s sales to top NEV leaderboards in China during the fourth week of November, with BYD overseeing 38,480 insurance registrations while Tesla had 16,121, according to a report from CnEVPost. […]
Peter McGuthrie
5 hours ago

After Tesla stepping up its hiring efforts in Thailand earlier this year caused some to expect an upcoming launch in the country, the automaker has officially announced plans to start selling cars there. In a post on LinkedIn, Tesla shared a photo with text in Thai translating to “Hello Thailand,” and saying “See you December […]
Peter McGuthrie
6 hours ago