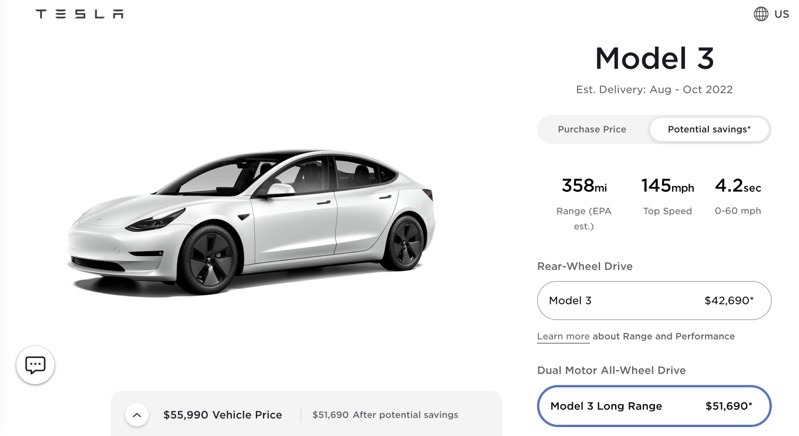 Tesla has increased the price of the Model 3 again in the United States, by up to $1,500 USD. Check out the changes below (via @BLKMDL3):

For the Model 3 Long Range with entry 18-inch Aero Wheels, delivery estimates are at August to October 2022.

For Model 3 Performance, estimated delivery dates are showing as June to August 2022.

The global semiconductor shortage is ongoing and all automakers are being affected, to go with supply chain pressures as well. Tesla has been able to weather the storm better than other carmakers, as its Q1 saw a record 310,048 cars delivered.

Tesla has added a “camera preview” feature to the vehicle’s service menu, as spotted this week by @Stian Walgermo. The feature came as an update to Tesla’s software in version 2023.2.0.5, most of the new features of which were simply minor fixes. The feature shows a simple view from the camera, without having to use […]
Peter McGuthrie
4 hours ago

Recent weeks have brought on conversations about Tesla’s price cuts in markets around the world, and now the automaker is pushing a new message on its website for Model 3 leasing. Tesla’s Model 3 is now leasing at prices as low as $399 per month, according to a change on the automaker’s website yesterday, notes […]
Peter McGuthrie
5 hours ago

Investors just can’t get enough of Tesla’s stock, it seems. Around three million stock-option trades take place on an average day, and Tesla accounts for around 7 percent of all options on an average trading day, according to data from Cboe Global Markets, reports The Wall Street Journal. A stock option is a contract that […]
Peter McGuthrie
6 hours ago