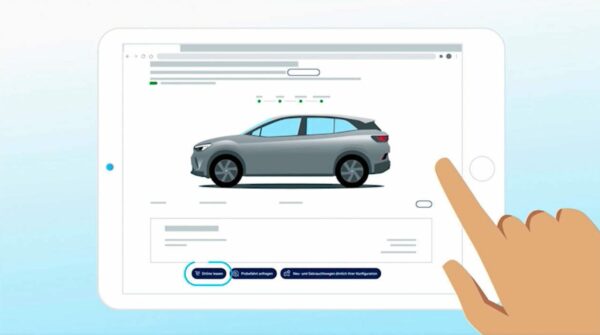 Like many automakers, Volkswagen has recognized and imitated Tesla’s business model in a handful of ways, but now it’s also the first major automaker to implement an online ordering system like the EV giant.

Volkswagen has launched the order configurator for online sales in Germany, first featuring the ID.4 and ID.5 models and later to be joined by the ID.3, according to a press release from the automaker.

The company will let users fully complete lease agreements online for those buying in Germany, and Volkswagen says its dealers will remain closely integrated with the company’s online business.

Volkswagen Might Build an Electric Truck in the U.S., Says Report https://t.co/irBToyGyAt

Volkswagen CEO Klaus Zellmer detailed how the move plays into the automaker’s Accelerate strategy, also explaining that vehicles will be completely configurable via the online platform.

Zellmer said, “Surveys show that around two-thirds of our customers also want to be able to purchase our vehicles online. We’re now addressing that wish. Our mission is to give our customers an excellent offering and buying experience both at dealerships and online. As a result, we’ll also strengthen our competitiveness lastingly.”

The order configurator is able to be accessed by customers via a PC, computer or smartphone, and is expected to be gradually expanded over time.

The online sales model will soon expand to include cash purchase and financing options as well.

Earlier this month, Volkswagen announced plans to develop a special purpose vehicle for use as a self-driving taxi based on the ID.Buzz.