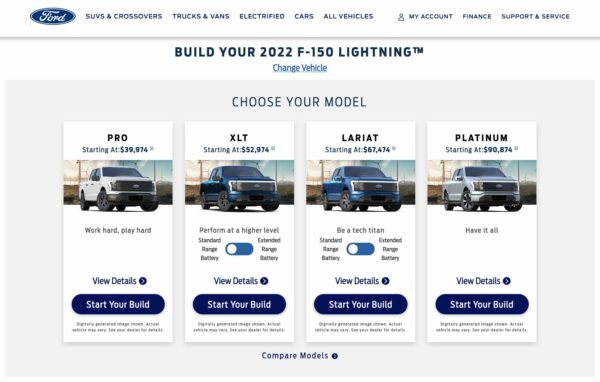 Ford CEO Jim Farley announced on Wednesday the company is set to hold a launch event on April 26, 2022. An image reads, “F-150 Lightning Strikes,” with the date and also a link to the company’s online configurator for the electric pick up. The event is set for 1:30pm ET, from the Rouge Electric Vehicle Center in Dearborn, where the truck is manufactured.

Customers can purchase their F-150 models in nine different color options, along with other add-ons like tow packages, storage boxes and several other pieces of hardware. It’s unclear when deliveries will start for the F-150 Lightning.

The entry-level variant can drive a range of 230 miles and the Platinum model is rated for as many as 300 miles, while the extended range Pro is rated for 320 miles.

In a recent video, Ford took the F-150 Lightning and a 10,000-pound trailer through snowy hills during Colorado’s winter conditions.

Ford previously said there are 200,000 F-150 Lightning reservations and it remains to be seen how many the company can deliver at launch. It has already said production will be doubled to meet high demand for the electric truck, to 150,000 annual units per year, hopefully by the end of 2023.

On the same day of the April 26th event, Ford has a 6pm PDT live stream slated, titled “Getting to know the F-150 Lightning Pickup,” with a description that reads, “Tune in as we take a good look at what makes the all-new, all-electric F-150 Lightning the smartest, most innovative truck Ford has ever built, all while we answer your questions live!”.

Consumer Reports has rated Ford BlueCruise as its top-rated driver’s assistance system, topping the publication’s last-year pick of GM’s Super Cruise and the Tesla Autopilot system, which has fallen further behind in the rankings over the past few years. The pick also pushed Tesla’s Autopilot toward the middle of the pack, with the outlet saying […]
Peter McGuthrie
3 days ago

Ford may be talking with Chinese automaker BYD about selling its Saarlouis, Germany plant, according to sources familiar with the matter in a report from The Wall Street Journal. Officials at Ford will head to China next week to talk about the potential sale of the German plant, which is currently planning to stop producing […]
Peter McGuthrie
4 days ago