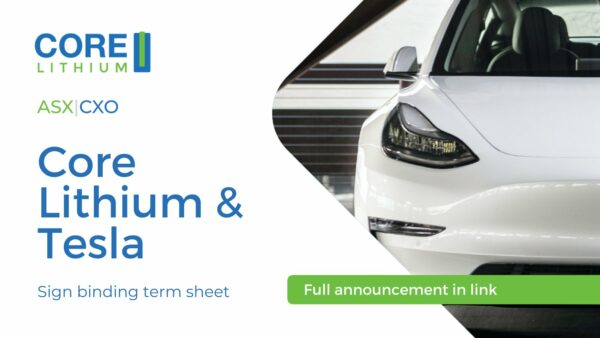 South Australia-based emerging lithium producer Core Lithium Ltd., announced on Wednesday an agreement with Tesla Inc to supply the automaker with up to 110,000 tonnes of lithium spodumene concentrate over a term of four years.

The deal has boosted Core Lithium’s shares up 13% in early trading.

“Subject to execution of a definitive agreement, Core’s supply to Tesla is scheduled to commence in 2H 2023 and will cease on the date that is 4 years after commencement of supply or until a total of up to 110,000 dry metric tonnes has been delivered,” said the company in a press release.

In August, the Australian company announced that Ganfeng, —the globe’s biggest lithium company by market capitalization— had agreed to buy 300,000 dry metric tonnes of spodumene concentrate also from their Finniss project.

The arrangement reflects the rising demand for battery-essential metals like lithium, nickel, and cobalt, as the world keeps shifting away from fossil fuels.