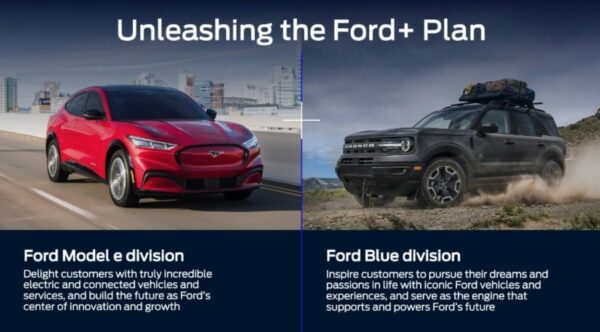 Following an update on Monday detailing Ford’s plans to run its electric vehicle (EV) business separate from its gas car business, the automaker has unveiled its strategy to create two distinct auto arms.

The divisions will be run separately but interdependently, with Ford Blue focusing on building out internal combustion engine (ICE) vehicles while Ford Model e will continue to scale EVs and develop software for future vehicles.

The two branches will share technology and best practices for scaling production and will be run alongside Ford Pro, a division created specifically for business owners and government customers.

The division is a part of Farley’s Ford+ plan, which holds that the three business branches will each have their own Profit and Loss statements by 2023.

Consumer Reports has rated Ford BlueCruise as its top-rated driver’s assistance system, topping the publication’s last-year pick of GM’s Super Cruise and the Tesla Autopilot system, which has fallen further behind in the rankings over the past few years. The pick also pushed Tesla’s Autopilot toward the middle of the pack, with the outlet saying […]
Peter McGuthrie
1 day ago

Ford may be talking with Chinese automaker BYD about selling its Saarlouis, Germany plant, according to sources familiar with the matter in a report from The Wall Street Journal. Officials at Ford will head to China next week to talk about the potential sale of the German plant, which is currently planning to stop producing […]
Peter McGuthrie
2 days ago