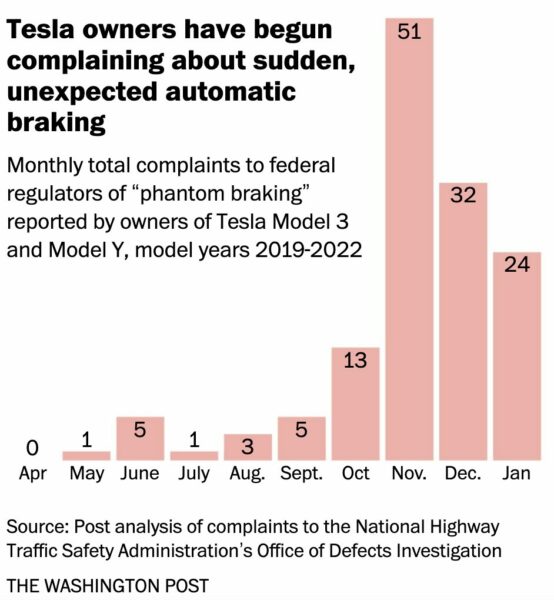 Reports of Tesla’s vehicles unexpectedly braking have been way up in the past few months, as shown in data collected from a U.S. regulator.

Tesla drivers have been reporting phantom braking at increasing rates, according to a report from The Washington Post analyzing National Highway Traffic Safety Administration (NHTSA) complaints.

The analysis looks at complaints of phantom braking over the past three months which applies to situations when Tesla’s vehicles unexpectedly slam on the brakes amidst falsely perceived hazards.

The report shows that phantom braking complaints to the NHTSA increased to 107 over the past three months, up from just 34 total in the 22 months prior.

November 2021 saw 51 complaints, followed by 32 in December and 24 in January to the NHTSA, in what appears to be a downward trend, but still higher than the previous months.

Last November, CNET wrote a review citing it could not recommend the 2021 Tesla Model Y, due to its ‘phantom braking’, calling it a “deal-breaker”. It’s unclear if the scathing review is tied to the surge of complaints to the NHTSA that month.

Tesla North writers can attest to experiencing ‘phantom braking’ in the past when driving on the highway with Pure Vision Autopilot enabled. It doesn’t happen often, but when it does, it can be shocking for both driver and passengers.

The Jeff Bezos-owned publication also noted that the complaints came following a switch from Tesla to using camera-only vision rather than radar for its Autopilot and Full Self-Driving (FSD) systems last May.

As electric vehicles (EVs) continue to gain steam across worldwide markets, one European country known for early adoption of zero-tailpipe-emission vehicles has just reached a new record for single-day deliveries from Tesla. Tesla set a new daily record with 297 vehicles delivered to Norway in one day with Model Y cars from Giga Berlin, as […]
Peter McGuthrie
21 hours ago

Tesla adjusted its Supercharger pricing in Germany and some other European countries again, this time raising prices by six to nine cents per kilowatt-hour at each station, reports @Tesla_Adri, sharing screenshots from @ModelXOlli. Along with the news, Tesla Adri also shared screenshots of the Hilden Supercharger preview on the Tesla mobile app before and after […]
Peter McGuthrie
22 hours ago