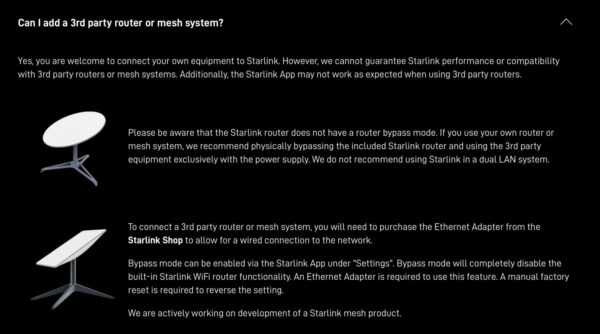 SpaceX is developing a mesh product for Starlink’s internet, according to updates made to the company’s frequently asked questions  (FAQ) page that was spotted by Space Explored.

It’s unclear what this ‘mesh product’ will be, but other mesh wireless routers such as those from Amazon’s Eero, allow for multiple wireless routers to act together as a larger mesh in your home for extended Wi-Fi coverage.

Elon Musk’s company also detailed a way to bypass the Starlink router and use your own, for those that want to. On the Starlink FAQ page, SpaceX added the new responses to the questions “Does the WiFi router have any Ethernet (LAN) ports to connect wired devices?” and “Can I add a 3rd party router or mesh systems?”

In its responses, the company says it recommends physically bypassing the Starlink router since it doesn’t include a bypass mode that can be turned on.

Updates shared earlier this week show that SpaceX is also working on a Starlink dish for use on buildings in harsher environments.

The space exploration company also launched another 49 Starlink satellites into orbit, bringing the constellations total number of satellites in orbit up to 1,469. Another launch is pegged for today.

SpaceX’s Starlink low-Earth orbit (LEO) satellite internet service also faced global outages earlier this month, with lingering effects remaining for some customers a few extra days, even after the service was back up.