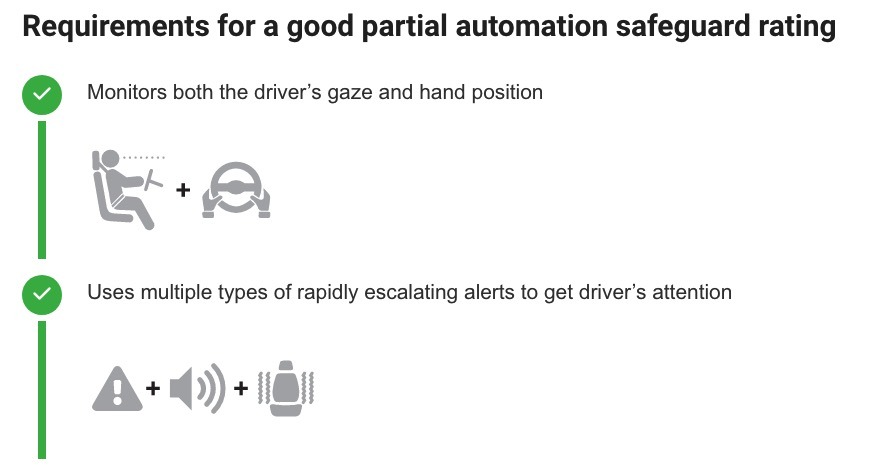 The Insurance Institute for Highway Safety (IIHS) announced plans on Thursday to develop a rating program for evaluating cars with partial automation, according to a press release from the agency.

The first set of ratings is expected to be debuted in 2022, though it’s unclear exactly when due to supply chain issues making it tough for the IIHS to obtain testing vehicles.

On the need for proper safeguards, IIHS President David Harkey said, “Partial automation systems may make long drives seem like less of a burden, but there is no evidence that they make driving safer.” says Harkey continued, “In fact, the opposite may be the case if systems lack adequate safeguards.”

In the rating system, vehicle safeguards will be rated either good, acceptable, marginal or poor, based largely on the driver’s eyes being on the road and their hands being on the steering wheel, in addition to evaluating how well a system raises alerts and emergency notices.

The IIHS also notes that, despite naming conventions, there is no software currently on the market that performs “self-driving,” subtly referring to Tesla’s Level 2 automation Full Self-Driving (FSD) system which has been criticized in the past for its name.

Requirements for ‘good partial automation safeguard rating’ are below:

As one example, San Francisco city officials expressed concern prior to the broadened release of Tesla’s FSD, saying that the name gave drivers the wrong impression of how much could be done.