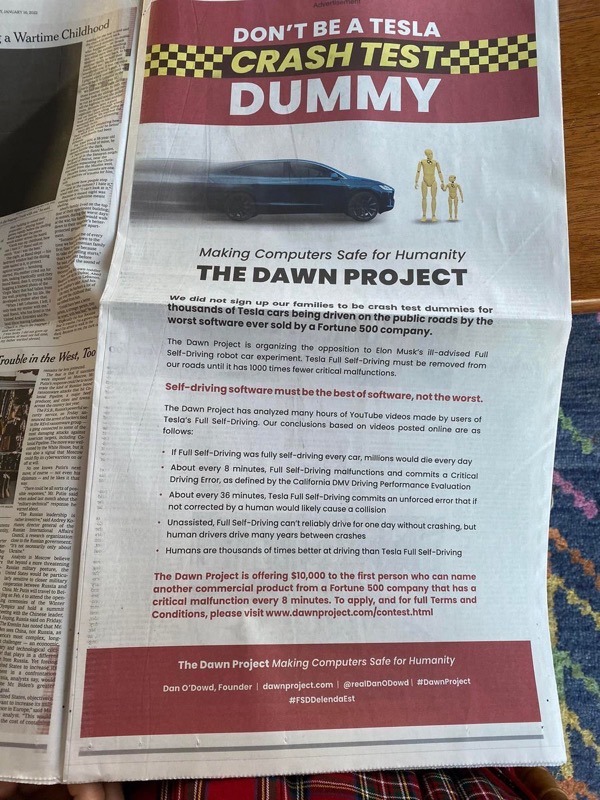 “Today I placed a full-page advertisement in the @nytimes, campaigning to ban @Tesla full self-driving from our roads. @RealDawnProject is organizing the opposition to @ElonMusk’s ill-advised full self-driving robot car experiment,” said O’Dowd on Sunday morning.

Today I placed a full-page advertisement in the @nytimes, campaigning to ban @Tesla full self-driving from our roads. @RealDawnProject is organizing the opposition to @ElonMusk’s ill-advised full self-driving robot car experiment #FSDDelendaEst #DawnProject

“Tesla Full Self-Driving must be removed from our roads until it has 1000 times fewer critical malfunctions,” says the ad, basing its conclusion on watching YouTube videos of FSD beta testers.

The ad says based on watching videos on YouTube, if FSD was in every car, “millions would die every day.”

Since the launch of Tesla’s FSD beta, there has not been one death caused by the software, whereas in that same period, 20,000 people have perished in car crashes, pointed out Tesla investor Ross Gerber.

Moreover, Tesla’s recent Q4 Vehicle Safety Report disclosed there was 1 crash for every 4.31 million miles driven by Tesla owners using Autopilot. Compared to the latest NHTSA data, there is 1 automobile crash every 484,000 miles in the United States.

Tesla’s Autopilot safety record improved in Q4 2021 year-over-year, as in Q4 2020, there was 1 crash every 3.45 million miles with Autopilot engaged. Safety is improving with Tesla’s frequent software updates.

Elon Musk replied to Gerber with a succinct, “correct”. Musk also replied to O’Dowd to say, “Green Hills software is a pile of trash. Linux [for the win].”

What O’Dowd failed to disclose in his ad, was the fact Green Hills Software is supplied to competitors of Tesla, including the likes of Toyota, Lexus, Ford, Mobileye, Jaguar and more.

Green Hills Software is also attempting to develop its own automated driving systems. It says its software has been “proven in hundreds of millions of vehicles.”

Tesla supporters were quick to reply to O’Dowd’s lack of transparency and also false ad in the New York Times. This may be the Tesla troll job of the year, in an attempt to seek attention for O’Dowd’s own cause.