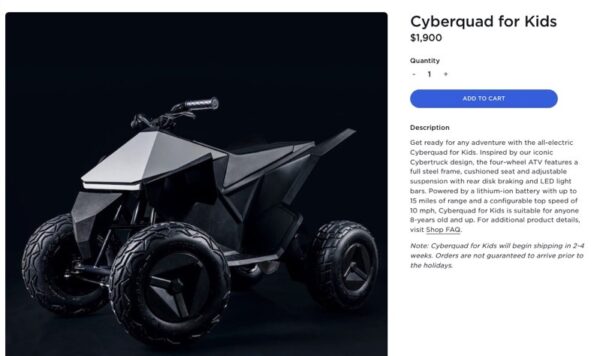 Just days after Radio Flyer launched the Tesla Cyberquad for Kids for $1,900 USD, it seems only natural that scalpers would use the sold-out technology to make a buck.

One Tesla Cyberquad for Kids hit $17,000 USD on an eBay auction as a “Buy it Now” price, nearly 10 times more than the original price, according to Car Scoops. As of writing, we’re seeing listings showing for $9,999 USD.

While most of the listed Cyberquads for Kids range significantly in prices, most have an auction set up with the option to buy the product instantly at a high, premium price.

The Cyberquad for Kids features a 36-volt lithium-ion battery pack, offering up to 15 miles (24 km) of range per charge.

With a top speed of about 10 mph (16 km/h), it also easily charges in five hours or so with the use of a regular residential electrical outlet.

After launching at the beginning of this month, Tesla’s Cyberquad for Kids sold out almost immediately.

A full-size version of the Tesla Cyberquad has also been seen on display at some Tesla events, and is expected to be launched at a similar time as the heavily-delayed Cybertruck.

Tesla kicked off its 2022 AI Day by showing off a demo of its Optimus robot. The Optimum bot was able to walk out on stage on its own, wave to the crowd and even ‘raise the roof’ to music. Optimus was shown lifting boxes, working in a factory doing some light work and even […]
Sarah Lee-Jones
7 hours ago