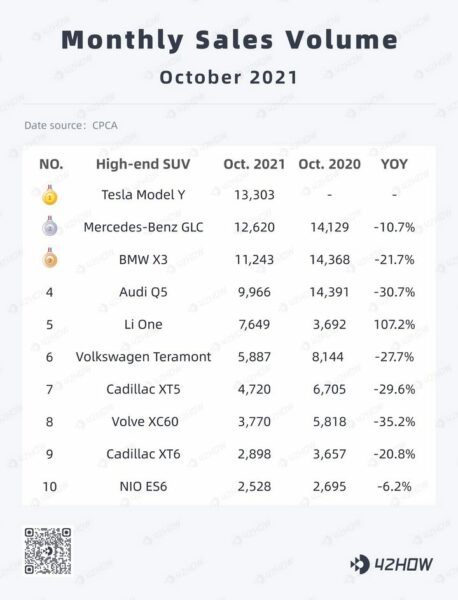 Immediately following the news that the Tesla Model Y Standard is sold out in China until early 2022, new data has come out showing that the electric vehicle (EV) was the country’s best-selling high-end SUV in October.

The Tesla Model Y was October’s top-selling high-end SUV in China, according to data from the China Passenger Car Association (CPCA) as compiled and shared by @42how_ on Tuesday. The Model Y sold a total of 13,303 units within the Chinese auto market in October, beating out the Mercedes-Benz GLC, which sold 12,620 units, and the BMW X3, which sold 11,243 units.

In the category of sales volume from January to October, Tesla’s Model 3 and Model Y units took second and third, respectively, falling behind the super-affordable Wuling HongGuang Mini EV (which is like a golf cart?!). While the Wuling Mini sold 304,495 within the ten-month period, the Tesla Model 3 sold 112,173 units and the Tesla Model Y sold 106,236 units during the same timeframe. 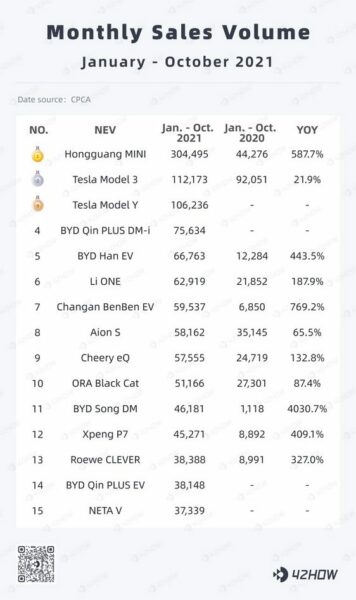 Tesla CEO Elon Musk has spoken out in regards to his agreement to buy Twitter on the original terms, after news broke on Tuesday morning. Musk said just now, “Buying Twitter is an accelerant to creating X, the everything app.” When asked if it would be easier to build X from scratch, Musk replied, “Twitter […]
Sarah Lee-Jones
2 hours ago

Tesla has announced it will be removing ultrasonic sensors from its vehicles, the next step of its camera-based Tesla Vision Autopilot. “Today, we are taking the next step in Tesla Vision by removing ultrasonic sensors (USS) from Model 3 and Model Y. We will continue this rollout with Model 3 and Model Y, globally, over […]
Sarah Lee-Jones
4 hours ago

Tesla announced on Tuesday it has hit a milestone of reaching 10,000 Superchargers in Europe. “Tesla owners in Europe now have access to over 10,000 Superchargers, spread over 30 countries,” said the automaker on LinkedIn. “The European network has already grown more in 2022 than any other year, with still 3 months to go,” said […]
Sarah Lee-Jones
6 hours ago