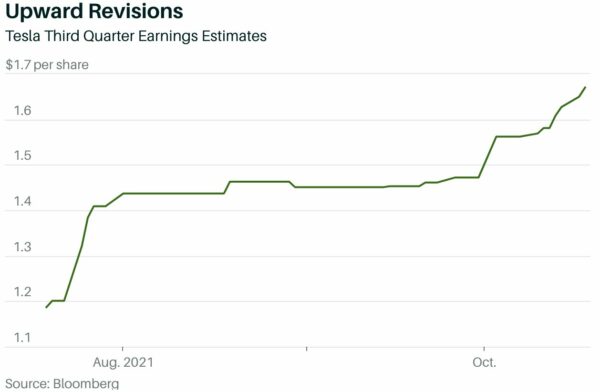 Amidst the struggle of companies like General Motors (GM) during the semiconductor chip shortage, Tesla has continued to grow despite an overall auto industry downturn.

Tesla’s stock is way up over the past several months, which could lead to post-earnings stock volatility for the company, according to Barron’s.

While Wall Street reportedly expects Tesla to earn nearly $1.67 a share from $13.9 billion in expected revenue, these estimates have also grown in the past month alone – with analysts having projected $1.45 per share from $13.1 billion just a month ago.

We will likely hear more about how Tesla has been able to grow deliveries during the global semiconductor shortage.

The earnings call is set to begin later today at 2:30pm PDT/5:30pm EDT and will detail news about the chip shortage, as well as the wider rollout of Tesla’s Full Self-Driving (FSD) beta, alongside the completion of both Gigafactories Berlin and Austin.

In Q2, Tesla reported $1.45 per share from $12 billion in sales. With a total of 241,300 vehicles delivered in Q3, Tesla had an impressive quarter in sales alone, though analysts and investors alike will look for gross profit margins in the earnings report to better measure the company’s success.

Tesla CEO Elon Musk also announced at the company’s Q2 earnings call that he won’t be on future earnings calls, unless “there’s something important” he needs to share – so we can probably expect not to see him on this earnings call.

You can tune into the Tesla Q2 2021 financial results and Q&A webcast below:

In a recently published YouTube video, Brad Sloan gives us a high-fidelity aerial tour of Tesla’s Gigafactory in Austin, Texas, on the morning of Friday, November 25. While most of the workers had the day off for Thanksgiving, some contractors can still be spotted on the site. A fair amount of ready-to-deliver Model Y units […]
Nehal Malik
17 hours ago