Lucid Group has announced it has started vehicle production at its Casa Grande factory in Arizona, as part of the company’s Lucid Production Preview Week, which kicked off today, with customers, media and policymakers, including Arizona Governor Doug Ducey, in attendance.

The first Lucid Air electric vehicle for customers were driven off the assembly line after achieving EPA certification and also FMVSS safety certification.

Lucid Group told Tesla North in an email customer deliveries will begin in late October and reservations for Lucid Air have surpassed 13,000. Images in this story were sent from Lucid Group today.

The event also provided attendees to some of the first test drives of the Lucid Air, with the Dream Edition set to deliver to customers in late October. Grand Touring, Touring, and Air Pure model deliveries are expected to follow afterwards, said the company. The planned total production quantity of the Dream Edition has been increased to 520 vehicles.

The Lucid Air Dream Edition Range recently received an EPA rating of 520 miles on a single charge, which Lucid Group pointed out was “more than 100 miles over its closest competitor.” 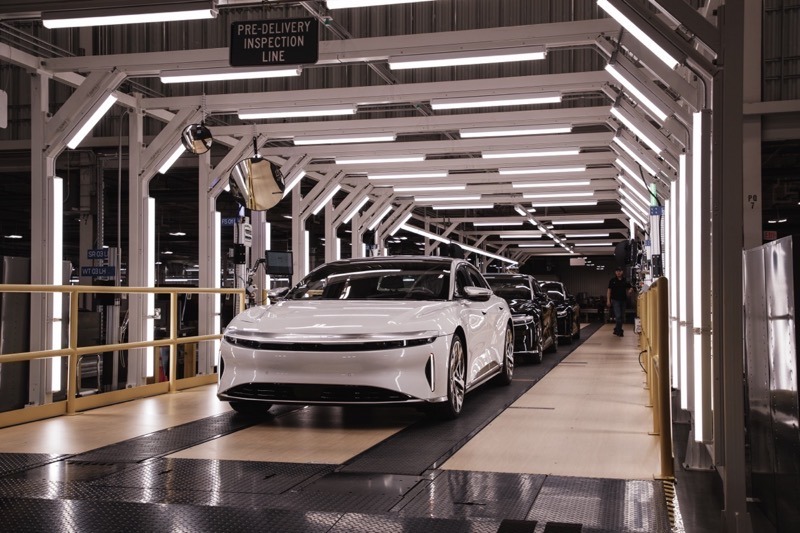 “The proprietary EV technology that Lucid has developed will make it possible to travel more miles using less battery energy. For example, our Lucid Air Grand Touring has an official EPA rating of 516 miles of range with a 112-kWh battery pack, giving it an industry-leading efficiency of 4.6 miles per kWh. Our technology will allow for increasingly lighter, more efficient, and less expensive EVs, and today represents a major step in our journey to expand the accessibility of more sustainable transportation,” said Peter Rawlinson, CEO and CTO, Lucid Group, in a statement to Tesla North. “I’m delighted that production cars endowed with this level of efficiency are currently driving off our factory line.”

Lucid’s AMP-1 factory sits on a 590-acre site in Casa Grande, Arizona, and was completed in less than a year and is set for expansion, to add 2.85 million square feet to support scale production of the Air, plus establish production for the company’s first SUV EV, the Gravity, expected to begin in 2023.