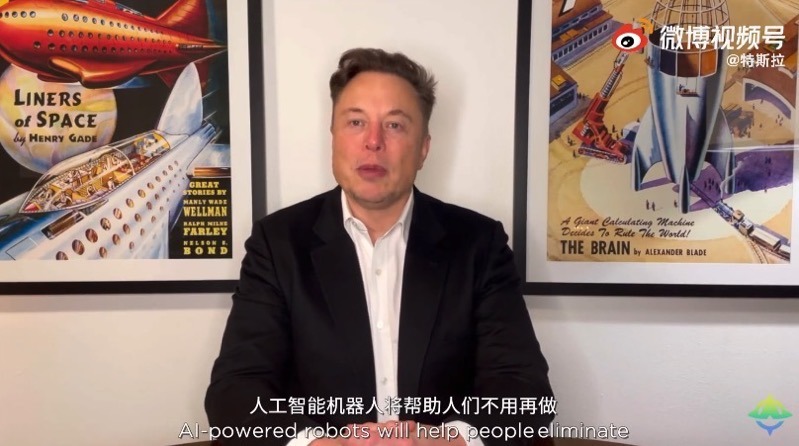 Tesla CEO Elon Musk has given yet another prepared speech in China, this time for the 2021 World Internet Conference, Wuzhen Summit, taking place from September 26-28.

Musk said in his opening remarks it was a “pity” he could not join in person, due to the COVID-19 pandemic.

Musk discussed artificial intelligence, noting how it would both serve and be served by humans, in a symbiotic relationship. He said with humanoid AI-powered robots, the latter would help eliminate “dangerous, repetitive and boring tasks.”

The Tesla CEO said the next generation of internet devices are going to be intelligent and connected vehicles that will “transform our lives.”

When asked about future trends of Tesla’s development of digital technologies and how it would impact human and society development, Musk said Tesla is more than a car company.

He again noted Tesla is “developing full self-driving vehicles with practical, vision-based artificial intelligence, including chip development on the inference level and on the training level.”

Autonomous driving can be possible with vision neural nets like what humans are using to drive. “Tesla is arguably the biggest robotics company because our cars are like semi-sentient robots on wheels,” explained Musk.

Musk was also asked about data security of intelligent and connected vehicles. He said Tesla was “glad” to see laws released to “strengthen data management.”

“Tesla has set up a data center in China to localize all data generated from our business here, including production, sales, service and charging. All personally identifiable info is securely stored in China without being transferred overseas,” explained Musk, seemingly reassuring Chinese customers. Musk said data security should be a “mutual effort for all industry players.”

Musk said Tesla is working with regulators on finding the best solutions for data security. He praised China as a “global leader in digitalization.”

You can check out the full 3-minute opening speech below, as shared by Tesla China on Weibo:

Last week, Musk gave a similar prepared speech for the 2021 World New Energy Vehicle Congress in China. Tesla is playing its cards right in China it appears, appeasing both regulators and customers, with Musk aiming to win the “hearts and minds” of those in the country by praising the country’s technological advances.

Tesla CEO Elon Musk has spoken out in regards to his agreement to buy Twitter on the original terms, after news broke on Tuesday morning. Musk said just now, “Buying Twitter is an accelerant to creating X, the everything app.” When asked if it would be easier to build X from scratch, Musk replied, “Twitter […]
Sarah Lee-Jones
52 mins ago