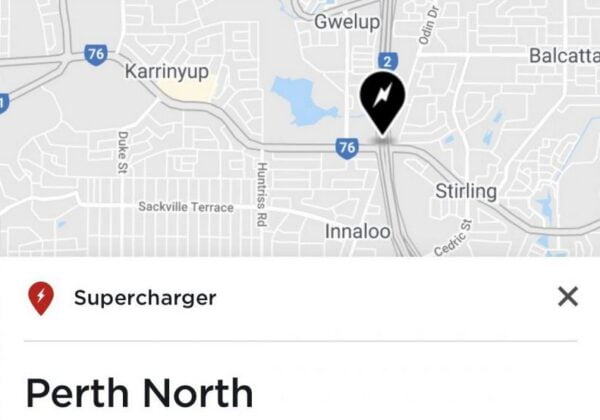 Tesla’s charging infrastructure continues to expand across the world, with the most recent addition to the network taking place down under.

Tesla officially established its first Supercharger outside of Perth, Western Australia on Thursday, located in the suburb of Karrinyup, according to The Driven. The Supercharger station consists of six V3 250kW Supercharger stalls, and opened alongside the nearby Karrinyup Stage One shopping center.

Tesla Owners Club of Australia President Mark Tipping said, “Driving an electric vehicle is a fantastic way to contribute towards lowering Western Australia’s carbon emissions. It’s great that these Superchargers are positioned in such a handy location at Karrinyup. This is a really positive step for WA’s Tesla owners, and I hope will encourage others to think about driving an electric vehicle.”

Earlier this month, Tesla confirmed that it has secured nickel supply from Australian company BHP, which is also the world’s largest nickel-mining company. The company announced earlier this year plans to spend over $1 billion annually in Australia for minerals, expected to be mostly in nickel and lithium – two metals that are necessary for building Tesla’s batteries.

Tesla also dropped the price of the Model 3 to $59,990 AUD earlier this month, down from $62,900 AUD in April, and following a sequence of price drops that have taken place in the past year or so.