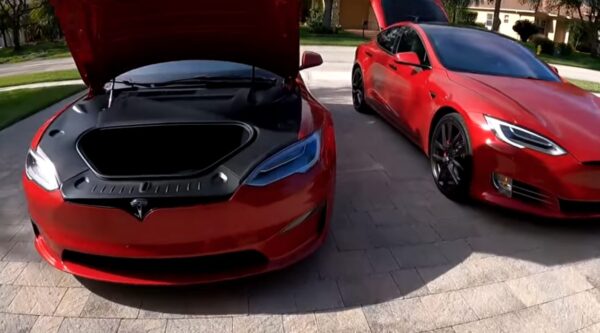 The Tesla Model S Plaid was released last month at a Plaid delivery event, and since the vehicle’s release, it’s been compared on a number of different factors, most recently considering the weight and overall size.

After documenting each vehicle’s weight and overall size, the hosts take the two vehicles out for a race – in which the Plaid dominates the older Model S, which was refreshed earlier this year.

The Model S Raven weighs 4,996 pounds (2,266 kg), while the Model S Plaid weighs 4,833 pounds (2,192 kg), a 163 pound (74 kg) difference. This is despite the Model S Plaid having heavier wheels and tires. It’s unclear what efficiencies Tesla used to make the refresh lighter, aside from a slightly smaller battery pack.

After taking a test drive in the Model S Plaid, one of the hosts says that “it’s not even close,” in terms of the Plaid’s sheer speed compared to the refreshed Model S.