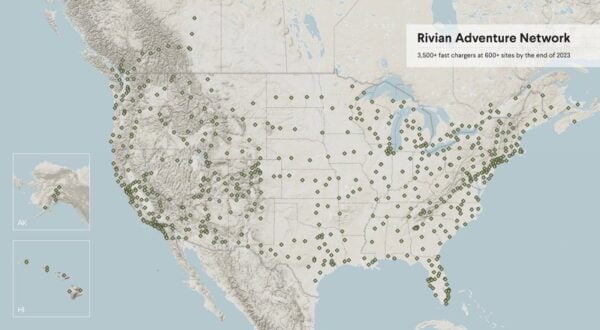 Earlier this year, Rivian announced plans to install over 600 electric vehicle (EV) charger sites across the U.S. and Canada by 2023, some of which will even be destination points for state parks and other attractions.

Rivian plans to install new waypoint chargers at each of Tennessee’s 56 state parks, said the company in an email to Tesla North. The news comes after the company announced that it would begin establishing a similar state park charging network in Colorado in July.

Rivian founder RJ Scaringe says the sites are deliberately beyond highways and other more convenient stops, in order to draw charging customers to important attractions.

“Tennessee’s State Parks will be home to some of our very first Rivian Waypoints and at the forefront of our plan to provide accessible EV charging to those adventuring in America’s most beautifully preserved environments,” said Matt Horton, executive vice president of Energy and Charging Solutions at Rivian, in an issued statement Tesla North.

The move to create “destination chargers” also comes in contrast with Tesla’s Supercharger network, which is designed along highways and shopping centers to make charging convenient.

Rivian will oversee the design and installation of the Level 2 chargers, which are compatible with all EV models currently on the road. The chargers can offer up to 11.5 kilowatts of power, and will be free at the start. Future costs “may be dependent on systemwide utilization to recover electricity costs,” says Rivian.

The EV company will also provide utility upgrades linked to the charger installation at no charge to state or taxpayers, while also cover all network access fees, equipment service, and maintenance for 10 years.

Earlier this month, Rivian also announced new delays to its R1T electric pickup truck, now set to begin deliveries in September after it had recently delayed production until July.