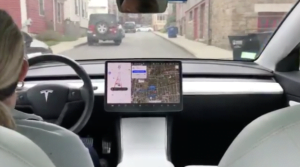 Tesla’s Full-Self Driving (FSD) beta 9 has been a hot topic in recent weeks, and according to a new update, the software upgrade will give vehicles the ability to recognize digital variable speed signs.

In response to a question about when Tesla’s Autopilot will be able to recognize digital variable speed signs, CEO Elon Musk stated that the ability would become available in the upcoming Full Self-Driving (FSD) beta 9 build, expected to be rolling out to customers soon.

Musk stated that the technology is “caused by switching frequency of light source,” going on to say that “surround video (multiple cameras, across several frames), improving fps & exposure setting tweaks solves this.”

The highly-anticipated FSD beta 9 is set to include support for Tesla Vision, or the company’s switch from radar-based sensing technology to camera-only – called “Pure Vision” by Musk in the past.

While Tesla Vision has already started working with Autopilot, the advanced FSD software update is expected to bring about major changes to the self-driving system.

Earlier this week, Musk also said that Tesla’s Model 3/Y units will receive an updated user interface with FSD’s wide release, following a new user interface featured in the recently-released Model S Plaid, which was unveiled at a delivery event in June.

Tesla Deliveries in Taiwan Said to Include CCS2 Charging Port