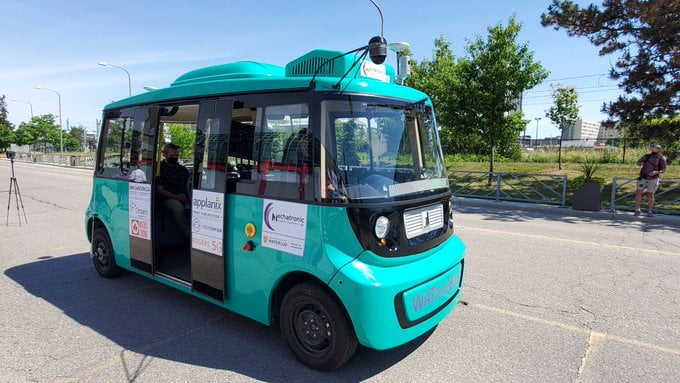 The University of Waterloo in Ontario, Canada, is testing an autonomous shuttle bus on campus, powered by the Rogers 5G network. The bus will transport students and staff around the university’s campus, as part of a research program.

VIDEO: The WATonoBus arrives at its destination. The entire tour around Ring Road took about 10 minutes, and controlled in a control room on campus, using @Rogers 5G technology! pic.twitter.com/ZOPaBNq9lz

The shuttle is named “WATonoBus” and is the first of its kind used by an academic institution. The shuttle can make its way to five stops on the 2.7 km (1.6 miles) journey around Waterloo’s main campus, which intersects with the school’s light rail transit stop.

“We are thrilled not only about WATonoBus, but what it represents,” said Feridun Hamdullahpur, president and vice-chancellor of the University of Waterloo, in a statement. “By marrying transformational research, infrastructure and a network of industry and government partnerships, we are demonstrating that educational institutions will help shape the future – in this case, the convergence of public transportation and smart urban mobility.”

The autonomous shuttle bus was developed by the University of Waterloo, led by Professor Amir Khajepour and a team of over 20 researchers in the Mechatronic Vehicle Systems Laboratory. Funding comes from provincial and federal partners, to go with private partners as well.

The shuttle bus has 360-degree cameras, LIDAR, plus a smartphone app for passengers to use to navigate the campus with the shuttle. This marks the first time a self-driving shuttle will operate solely on a 5G network.

Before the system can operate, it still requires approval from the Ontario Ministry of Transportation (MTO). The shuttle bus is part of Ontario’s Automated Vehicle Pilot Program, which allows testing of driverless AVs on Ontario roads, as long as a human is on board.