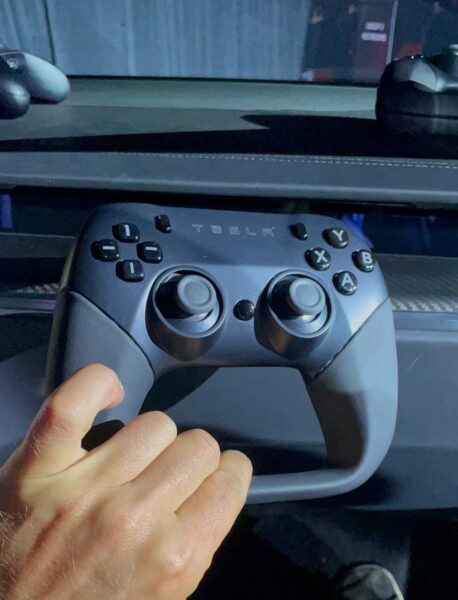 While it may not be an original game from its own game studio, Tesla has indeed released a new game to show off its new AMD hardware.

Following the company’s Model S Plaid Delivery Event on Thursday, Tesla unveiled its gaming controller and a Tesla console copy of Cyberpunk 2077, according to a pair of posts from Ryan McCaffrey and Frank&Beans (via The Kilowatts).

In a follow-up to the announcement, The Kilowatts asked Tesla Lead Product Designer Javier Verdura, “this you?”

Verdura confirmed that the controller was his design work, responding, “Yeah, feedback is welcome. Not a gamer myself but folks on my team are. I understand true gamers have very strong opinions about controllers.”

The controller sort of resembles an Xbox controller with X, Y, A, and B buttons on the right and a directional pad on the left, with lower analog sticks in between. The controller also says Tesla on the top middle, and Verdura’s comment emphasizes the company’s desire for constructive criticism and the potential for future updates.

Cyberpunk 2077, and other future games, can be played on the tilting Model S Plaid touchscreen, and offer an excellent way to play games seamlessly on the system while waiting for the EV to charge on the go.

Gaming performance in the Model S is powered by AMD graphics hardware, the same used in Sony’s PlayStation 5. Musk said during his presentation in-car infotainment was an emphasis for the new Model S, since owners will have more free time when Full Self-Driving eventually debuts.