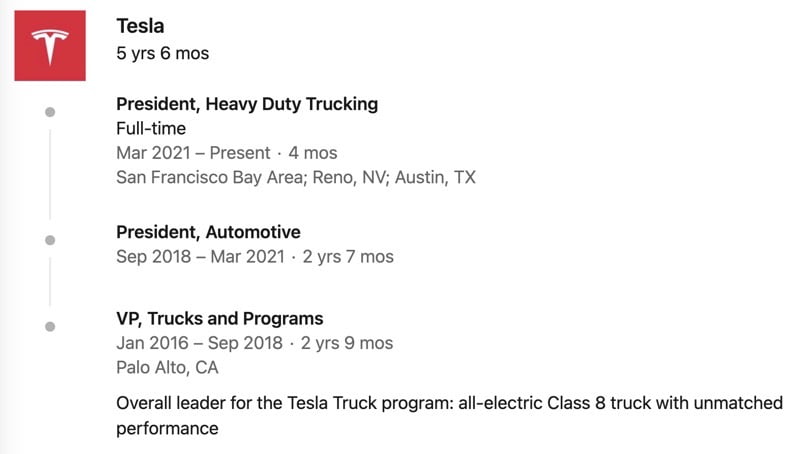 According to a Form 8-K filing with the Securities and Exchange Commission (SEC), Tesla has lost one of its long-time presidents.

“As of June 3, 2021, Jerome Guillen, President, Tesla Heavy Trucking, of Tesla, Inc. (“Tesla”), departed Tesla. We thank him for his many contributions and wish him well in his future career,” reads the filing.

The 10-year Tesla veteran was one of a handful of executives that worked alongside CEO Elon Musk. He helped ramp up Model 3 production back in 2018. He was named President of Heavy Duty Trucking at Tesla back in March and prior to the latter was head of Automotive.

“That is a huge and unexpected loss,” said analyst Pierre Ferragu from New Street Research, speaking to Reuters. “Jerome’s contribution to Tesla will remain part of the company and the company will continue to attract other top-guns.”

Guillen has yet to update his LinkedIn page, which still notes his current position at Tesla. The former Tesla executive studied mechanical and nuclear engineering in Paris, but received his PhD in Mechanical Engineering from the University of Michigan. He joined Tesla in 2010, after working at Daimler AG, as the director of business innovation.

More electric vehicles (EVs) are set to be sold in China this year than throughout the rest of the world combined, according to an exposé from The New York Times on Monday. As many countries struggle to incentivize EV sales using tax credits and subsidies, China’s customer base has already begun to pivot toward the […]
Peter McGuthrie
8 hours ago

A coming software update has added a useful pop-up feature for Tesla’s Superchargers, showing new details that weren’t previously included. Tesla software update 2022.36 includes a newly designed pop-up map feature for Supercharger locations, as detailed by Not a Tesla App on Monday. The pop-up map includes information such as the number of available charging […]
Peter McGuthrie
9 hours ago

Tesla’s official CCS Combo 1 adapters have begun delivering to customers, as noted on Monday by a Model 3 owner (via Reddit). The CCS adapter costs $250 in the U.S. and $325 in Canada, offering up to 250 kW at third-party charging stations where Tesla’s proprietary Supercharger connections aren’t available. Tesla launched official sales of […]
Peter McGuthrie
9 hours ago