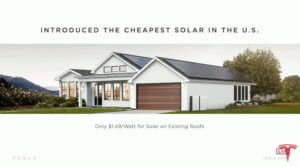 After reports that homeowners were suing Tesla for a $30,000 price increase during installation, one state is debating whether it should combine multiple lawsuits into a single class-action lawsuit.

A recent lawsuit filed against Tesla’s Solar division in California, the second of its kind within the state, has sparked questions by a state judge as to whether the lawsuits should be combined into a single class-action lawsuit, as reported by Business Insider.

The complaint says Tesla’s actions were a “classic bait-and-switch,” after Tesla changed the price of solar installations after an agreed-upon amount had already been established. The filing also signifies the second California lawsuit against Tesla over its solar division in the past two weeks, with many homeowners across the U.S. having difficulty contacting customer support following upped pricing.

Tesla CEO Elon Musk also recently confirmed that Tesla’s Solar systems can only be sold with the purchase of a Powerwall, the company’s home power management and charging system.

According to court orders filed earlier this week, and following the second lawsuit, veteran California Judge Lucy H. Koh will decide whether the suits should be combined.

Earlier this year, Musk did state that Tesla had a hard time accurately evaluating roof difficulties, saying, “We did find that we basically made some significant mistakes in assessment of difficulty of certain roofs.”