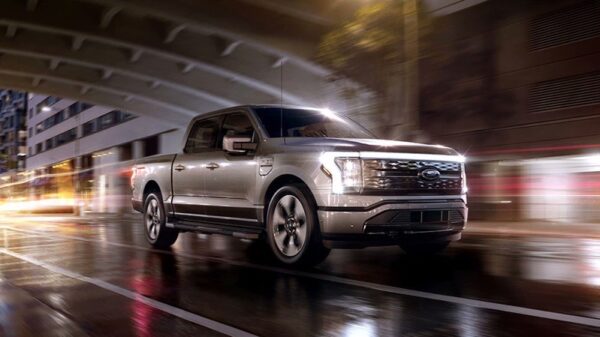 Ford has shared pricing and specs for its upcoming electric Ford F-150 Lightning pickup truck, and in a new update, we had the fortune of witnessing the first drives and impressions from the highly-anticipated upcoming electric truck.

In a pair of new videos from Roadshow and Two Bit da Vinci, respective hosts Craig Cole and Ricky perform test drives and full breakdowns of the electric Ford F-150, complete with some comparisons made to rivaling electric truck, the Tesla Cybertruck, set for production later this year.

While Ford’s electric reimagining of one of the most purchased pickup trucks in the U.S. is receiving rave reviews thus far, each video essentially goes on to further establish the positive outlook, with each host discussing the truck’s impressive driving and power.

Even U.S. President Joe Biden got to try the electric F-150 out, saying “this sucker’s quick.”

The F-150 Lightning has a starting price of $39,900 before tax incentives for the truck’s standard range variant, which reportedly offers 230 miles of range per charge. Adversely, the truck’s extended range battery offers up to 300 miles of range, and both are set for launch in mid-2022.

This morning, Ford also revealed it had surpassed 20,000 pre-orders of the F-150 Lightning in 12 hours after the reveal, saying “the response has been great”.

"We have 20,000 orders already, 12 hours after the reveal," says $F CEO @jimfarley98 on the new EV F-150. "This is America's best-selling vehicle so if there is one vehicle that's going to give us an indication of whether these EVs are going to take off, it'll be this Lightning." pic.twitter.com/C6voVDTuDl

In comparison, Tesla’s Cybertruck saw 250,000 pre-orders in six days after its reveal, according to Elon Musk. This November will mark two years since the Cybertruck was first unveiled.

Since Ford’s first electric vehicle launched in China last year, the automaker has sold far fewer electric vehicle (EV) units than some of its fellow automakers, though it’s hoping to change that with a new company and testing entity. Ford established a new company in China called Ford Electric Mach Technologies (FMeT), as detailed in […]
Peter McGuthrie
6 days ago

Another police department in Connecticut is set to start testing electric vehicles (EVs), in hopes that they could work as patrol cars. Wethersfield Police Chief Rafael Medina plans to begin testing EVs to see if they’re suitable for police use, as CT Insider reported on Tuesday. “We still have to figure out if are they […]
Peter McGuthrie
2 weeks ago