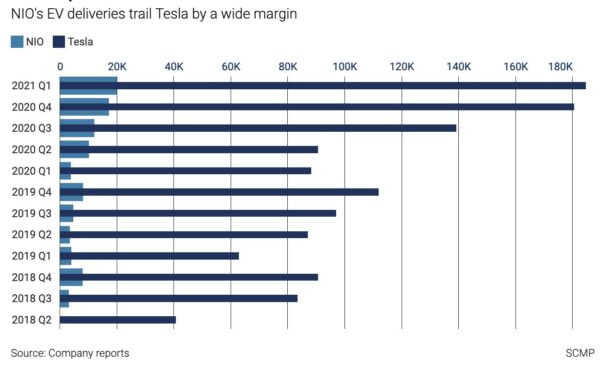 NIO vs Tesla chart; via SCMP

The record-breaking quarter also comes at a time when companies around the world including NIO were forced to delay production due to a global semiconductor chip shortage.

William Li, NIO founder and chief executive, said in a statement, “The overall demand for our products continues to be quite strong, but the supply chain is still facing significant challenges due to the semiconductor shortage.”

Li continued, “In light of the strong momentum under a volatile macro environment, we expect to deliver 21,000 to 22,000 vehicles in the second quarter of 2021.”

In January, NIO unveiled its flagship sedan, the ET7, which is the world’s first EV with a range up to 621 miles per charge.

NIO founder, chairman, and CEO William Li said on Saturday that the electric vehicle (EV) maker is making good progress on its smartphone project and teased that the first model could launch within a year (via CnEVPost). Li said back in March that the company started looking into phone manufacturing after customers expressed interest in […]
Nehal Malik
5 hours ago