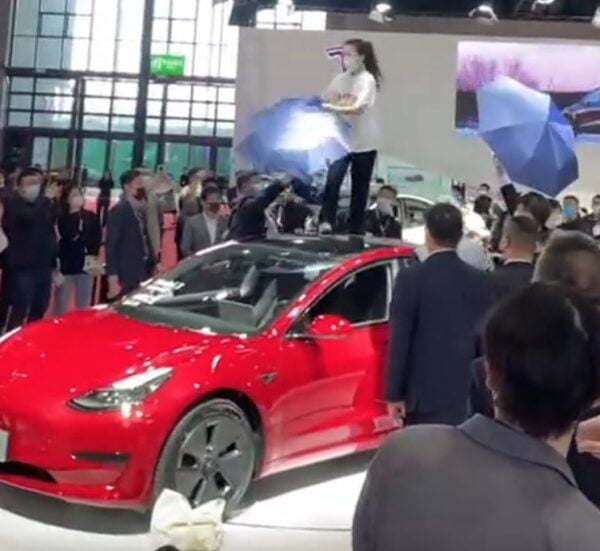 Following a protest of Tesla’s brakes at Auto Shanghai on Monday, in which a woman jumped on top of a Model 3 and claimed that the company’s brakes don’t work, mounting attention and pressure from social media has caused Tesla to issue an apology and release the data involved in the incident.

On Wednesday, Tesla issued an apology to Zhang Yazhou, the woman involved in the incident, going back on its previous “no-compromise” statement made immediately after the incident, reports South China Morning Post.

Yazhou’s father was reportedly driving at the time of the accident, and following the apology, Tesla released the data from the crash.

Braking: protestor jumps on top of a Tesla during the SH Auto Show. A Model 3 owner, she claims to have nearly lost four of her family members in an accident after the brakes of her electric vehicle failed. pic.twitter.com/9S8F68qEh9

Independent Shanghai analyst Gao Shen said, “With the data release, an investigation can be conducted into whether the crash was really caused by a brake malfunction.” Shen continued, “At least, the case has attracted the eyeballs of millions of Chinese consumers who are keen to know more about EVs.”

Tesla released the data from the incident on Friday, which showed the car traveling at 118.5 km/hr (74 mph) before the accident, and slowing to 48.5 km/hr after using the brakes, all within an 80 km/hr zone. The data also included that the brakes had been used as many as 40 times within the half-hour prior to the event.

As seen in the images shared by @JayinShanghai, the data appears to indicate not enough brake pressure was applied before the Tesla crashed, countering the protestor’s claims the brakes had failed.

Tesla had to apologize for the incident after facing intense scrutiny from local media and the government, over its apparent handling of the case. The woman wanted Tesla to issue a full refund of her car, which the electric company did not comply with.