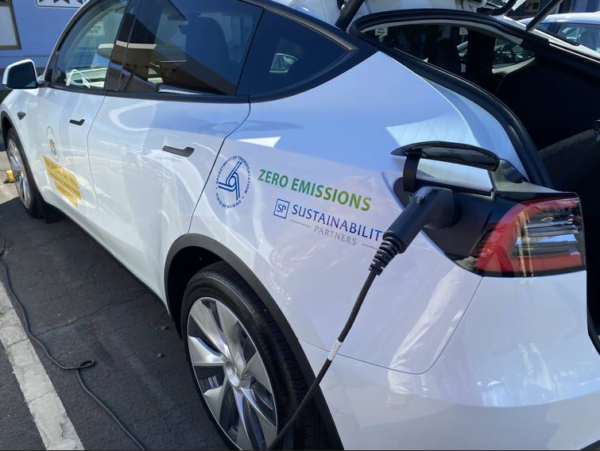 On Tuesday, Hawaii’s Department of Transportation began replacing its fleet with electric vehicles (EVs), starting with its very first EV – a white Tesla Model Y, as reported by the Honolulu Star-Advertiser.

The Model Y is the first of nine EVs to come, planned to replace other vehicles regularly used by the department’s State Highways division, and with another 34 to be delivered by the end of May.

In sum, the DOT has a fleet of roughly 300 passenger vehicles operating at any given time, and these will mark the first in a long series of electrification for the department.

The EVs were granted through a multi-agency contract with Sustainability Partners LLC, in a 10-year service contract in which state and county agencies won’t have to purchase the EVs upfront. Instead, the EVs can be procured along with all necessary charging infrastructure using a per-mile cost basis.

In a news release, DOT Deputy Director for Highways Ed Sniffen said, “We were definitely excited to begin the service contract with Sustainability Partners as converting our aging vehicles to EVs is another way HDOT is saving money and working towards the State’s goal of reducing fuel consumption in ground transportation 70% by 2030.”

Sniffen continued, “Public and private ground transportation is a huge contributor to carbon dioxide emissions. This service contract, that is available to all State and County agencies, could expedite government fleet conversions and help lead the way for increased private adoption of EV.”

A number of municipalities and police stations have looked to go electric in recent months, including US President Joe Biden who plans to replace the federal fleet with EVs.