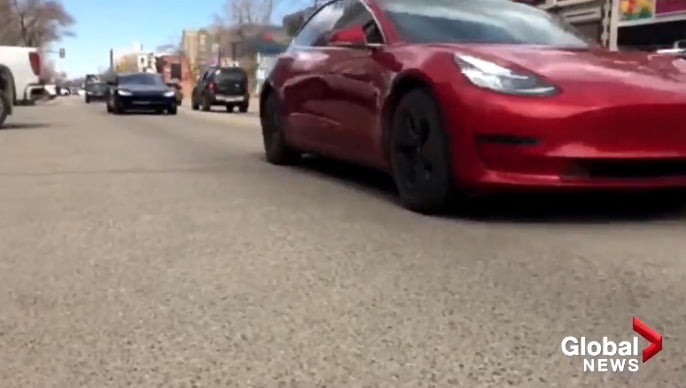 Last week the province of Saskatchewan in Canada announced it would start taxing passenger electric vehicle owners $150 CAD ($119 USD) per year. The decision would mean this is Canada’s first EV tax.

On Saturday afternoon, electric vehicle owners in Saskatchewan held a rally to protest the provincial government’s decision at the legislature, with various EV groups sharing concerns against the new tax.

SaskEV founder and president, Jason Cruickshank, told Global Saskatoon the rally was held to bring awareness of the EV tax and how it was unfair, considering there are only about 400 electric vehicle owners in Saskatchewan, making the group less than 1% of vehicles on the road.

Cruickshank said he felt it was too early for the province to implement an annual EV tax. He noted California instituted a tax when there were 700,000 electric vehicles on the road. When other provinces such as B.C. and Quebec are offering rebate incentives to buy EVs, Saskatchewan is doing the opposite, said the SaskEV founder .

While other provincial electric utilities such as B.C. Hydro, Hydro Quebec and ATCO in Alberta are investing in EV charging infrastructure, Saskatchewan and SaskPower, the province’s electric utility, have not made similar investments, said Cruickshank last week in a separate statement.

While EV owners will be taxed $150 CAD per year, there are yet to be fuel or vehicle taxes on hydrogen and natural gas vehicles in Saskatchewan.

“To tax when we’re just starting to see more EVs coming to the province is kind of disheartening,” said Jerilyn Nixon, board member with the Saskatchewan Electric Vehicle Association (SEVA), to the Leader Post. “It seems to put almost a damper on anything green.”

Joel Murray, vice president of the Tesla Owners Club of Saskatchewan, told the Leader Post EV owners are happy to pay their “fair share of the road”, but what frustrates him is there was zero consultation with EV owners about the new tax.

“We’re happy to pay for our fair share of the road, but there’s a lot of highways that we actually can’t get to because there’s no fast chargers to get us there, so we’re all willing to pay, but we want to be able to actually get to the highways they’re charging us to use,” said Murray.

He added if a new tax is out for EV owners, he’d like to see it put towards infrastructure electric vehicle owners can use.

It’s puzzling to see the Saskatchewan government put out a tax against EV owners, when they make up such a small number of vehicles in the province. It’s a move unlike what we’ve seen in other provinces across Canada, which are doing whatever they can to promote EV adoption, to lower carbon emissions.