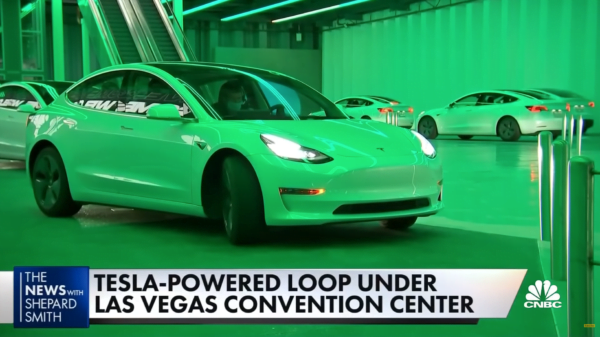 Elon Musk’s Boring Company shared new pictures of the company’s underground “Hyperloop” tunnels in Las Vegas earlier this year, and in a new update from CNBC TV, we can see inside the 43-foot underground tunnel with more than just photos.

Currently operating with the use of Elon Musk’s Tesla electric vehicles (EVs), the loop will function kind of like an Uber. Smith expects that users will be able to call a ride using their phone, then board a Tesla Model 3, and finally be dropped off at the exit of their choice – mitigating traffic above the loop, and in the tunnels using a multi-exit system.

The Teslas currently require a driver behind the wheel, but another one of the Boring Company’s secrets is that these Teslas will eventually become autonomous, once the technology improves to that point.

While the loop is currently only beneath the convention center, Las Vegas is looking to expand the underground “Hyperloop” system to include a city-wide loop. In addition, Musk’s Boring Company has already received approval to begin negotiating with LA County over an LAX airport loop.

Check out the video from CNBC TV below: