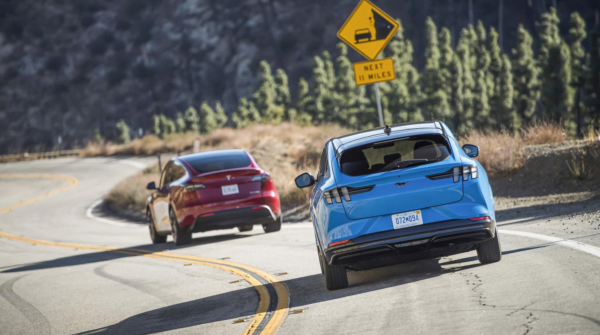 The Tesla Model Y and the Ford Mustang Mach-E have already gone head to head once before, and the results aren’t far from what we expected.

But now, a new test of these two electric vehicles (EVs) has emerged, coming to us Wednesday from Top Gear. In the write-up, the site includes the Tesla Model Y Performance and the Ford Mustang Mach-E first edition, both selling for a total of $61,000 (USD).

In sum, the EVs compete in four rounds of competition ranging from driving, exterior appeal, and interior appeal, to charging, with the final round beginning while both vehicles are at just 30% charged.

While the Mach-E is the predicted winner throughout, the Tesla Model Y consistently impresses the reviewers, ultimately ending with a 45-minute Supercharger session compared to the Mach-E’s 20-hours-to-go regular charging sessions.

Model Y vs Mach E size comparison. Mach E has a black roof which makes it look smaller than it actually is. Very good looking car. They drive similar, Model Y a bit tighter and quicker. Model Y also has a bit more interior space. Which one would you pick? pic.twitter.com/Jfsr2IHUc1

On the racing side of things, the reviewer points out the input speed takes longer to result in a specific output for the Mach-E than the Model Y. The story also calls the Model Y’s Autopilot and driving in general superior to those of the Mach-E.

Racing aside, in a public situation the review attempts to compare authentic exterior appeal, and garners significantly more compliments for the Mach-E than the Model Y. Still, the Model Y wins out on an interior style level, and every other category evaluated in the report.

There’s no doubt about it – the Tesla Model Y is the perfect electric SUV for the American household, and the Mach-E is simply no Mustang like the Ford classic. Still, they’re both pretty decent electric SUVs, and could make for worthwhile purchases for the right people.