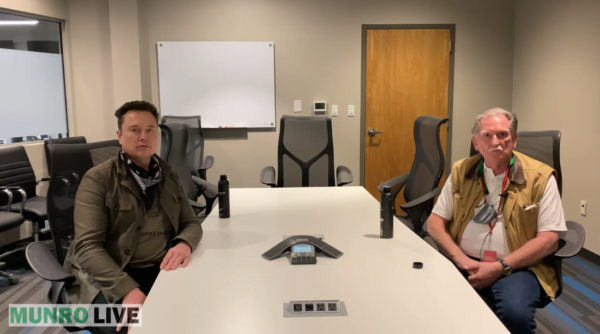 Tesla’s electric vehicles (EVs) have begun taking the world by storm, and they’re pushing mainstream adoption of zero-emission vehicles at every level.

On Tuesday, Sandy Munro released a new video on YouTube sharing a 1-on-1 interview with SpaceX head and Tesla CEO Elon Musk. In the interview, which takes place at Boca Chica, Texas, Munro and Musk discuss several topics relating to Tesla production, batteries, stocks, and more.

The nearly 50-minute conversation covers a number of topics, beginning with production flaws and how difficult high-volume production is for Tesla. Musk shares that, while building an EV is difficult, that part’s considered easy compared to scaling production for higher volumes.

As an example, he shares that the amount of time paint takes to dry is even significant, among numerous other things, and can affect how the final product turns out if not done correctly.

Compared to legacy manufacturers, some of which have over a century of high-volume manufacturing experience, Tesla is wading in uncharted territory, attempting to learn the craft of production on its own.

You can watch the full conversation between Elon Musk and Sandy Munro below.