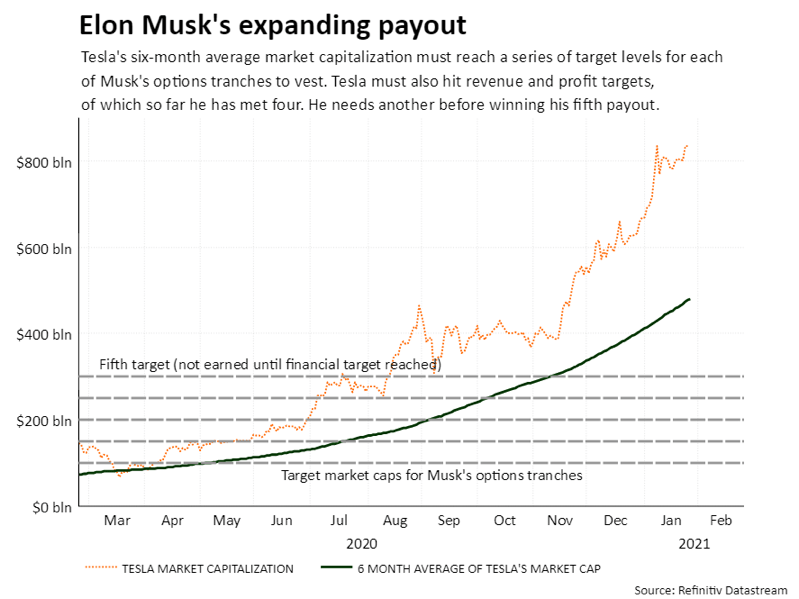 On Wednesday, Tesla’s Q4 2020 earnings could result in a $7 billion options payout for CEO Elon Musk.

According to Reuters, many are highly anticipating what Tesla will forecast for deliveries in its fiscal 2021.

“We’re expecting close to 900,000 deliveries. I think that as the economy opens up again, there is going to be pent up demand from people who want to spend some money,” said Baker Avenue Asset Management investment strategist King Lip, based in San Francisco.

Musk has no salary from Tesla or SpaceX in his roles as CEO. For Tesla, his compensation is based on Tesla market cap and revenue targets.

Musk will be able to buy 8.4 million shares of Tesla at $70 each, at more than 90% off compared to current share prices of $889 on Tuesday. Based on Musk’s previous tranches and the current tranche, he is expected to profit nearly $35 billion USD, or close to $7 billion USD per tranche.

According to the daily Bloomberg Billionaires Index, Musk remains the title of the world’s richest person with a net worth of $209 billion, an $18 billion lead over Amazon CEO Jeff Bezos in second place.

Analysts expect Tesla to report adjusted EBITDA of $2.3 billion, an increase of 92% year over year.

We will also most likely hear quarterly updates on how Gigafactories in Texas and Berlin are doing, plus updates from future vehicles such as the Cybertruck, Semi and Roadster.

Wall Street analysts from Refinitiv are predicting Tesla revenues for the fourth quarter to hit $10.3 billion (40% increase YoY), with net income of $752.5 million and adjusted earnings per share of $1.01.