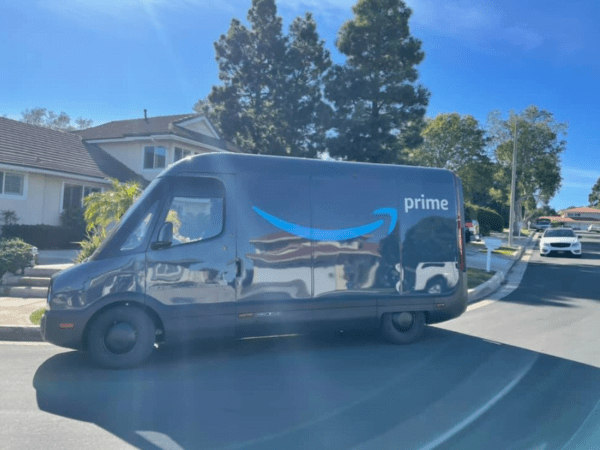 Rivian’s new electric delivery van for Amazon Prime has only been spotted a few times in the wild so far, though that’ll likely increase in the years and months to come. But in the newest sighting, the van’s looking fresh and new in a suburban neighborhood.

Facebook user Jeffrey Chen posted a series of photos and videos of a Rivian Amazon Prime electric delivery van, making a delivery to one of his neighbours. The photos feature a number of different angles, capturing all sides of the van, as well as two videos depicting the electric van running.

“I was outside walking the kids and asked if could see the vehicle and the out pops the Rivian engineer… had a good 10 [minute] conversation. Then the Amazon manager driving said I have deliveries to make lol,” said Chen, noting the van was in Los Angeles County.

Back in November, the Rivian electric van was spotted on the roads in California.

One particularly striking feature heard in one of the videos is the angelic polyphonic synthesizer noise which acts as the electric van’s pedestrian warning sound. Electric motors don’t make sounds like traditional gasoline engines, so electric automakers add artificial sounds to offer audible safety aids to nearby pedestrians.

“It was pretty loud… I could hear in my house with the bathroom window open on the second floor and I was downstairs… as it drove away from my house. Next to the vehicle it was pretty loud I say like a stock v6 running,” explained Chen.

While the “meditation music,” as some have called it, doesn’t seem to be a hit for everybody, it could be pretty amazing to hear and become attuned to the celestial sounds of our packages arriving in the future.

Still, whether they keep the pedestrian signal or not, the Rivian Amazon Prime electric van is hitting the road in North America, and it’s looking great driving around the neighborhood.

NIO founder, chairman, and CEO William Li said on Saturday that the electric vehicle (EV) maker is making good progress on its smartphone project and teased that the first model could launch within a year (via CnEVPost). Li said back in March that the company started looking into phone manufacturing after customers expressed interest in […]
Nehal Malik
15 hours ago