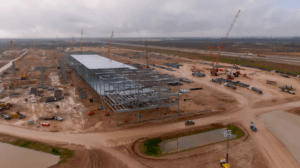 In the most recent video shared to YouTube by Jeff Roberts, he shares the happenings of Tesla’s Gigafactory Austin construction site on its 161st day of construction.

In the video, we see tons (literally) of materials including steel, concrete, and dirt, lining the ground of the site in a way that almost looks like they’re running out of room.

We can also see tons of puddles, and Jeff points out that the area has had a lot of rain recently. While this could slow down the pace of construction, the few times it has rained before saw little difference in building speed, so it likely won’t.

In any case, the completion of Tesla’s Gigafactory Austin will come with an exciting surprise deliverable: the official release to the public of the highly-anticipated Cybertruck. Completion is expected in summer 2021, and deliveries of the Cybertruck will begin shortly after, in the latter part of the year.