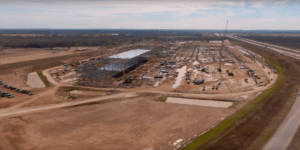 Tesla’s factory in Brandenburg, Germany may have hit a dead stop from deforestation efforts, but Gigafactory Texas is plugging away, day by day, even on the week of Christmas.

In a video released Monday by Jeff Roberts, we get a 4K drone flyover look at Tesla Gigafactory Austin on its 152nd day, with its first structure well on the way. We can also see the near completion of a number of footers placed throughout the construction site, which will eventually become the foundations for new buildings.

As Roberts writes in the description, we can see that Giga Texas is about ready to “‘pop’ to a new level of progression.” With one multi-level building continuing to go up, the new year will likely bring a swift completion of the building, and the addition of several more new structures, built up from the footers which have already been constructed.

As Tesla’s Texas Gigafactory continues to reach new heights, it will continue progressing towards an age where Tesla can build its own battery packs and mine its own lithium. For this reason, the Texas Gigafactory has also been dubbed by some, “the Texas Terrafactory.”

At any rate, Tesla is still advancing towards becoming the world’s most significant auto supplier, with climate crisis at our feet and nowhere to run but an electric future. And as it keeps expanding, consumer access to EVs is sure to keep expanding, too.

Tesla has launched a sunshade for the Model S refresh (2021+) in its online shop, priced at $120 USD. “Constructed from lightweight mesh fabric with a collapsible rigid frame, the Model S Glass Roof Sunshade blocks 66 percent of luminous transmittance. Easily removable, the sunshade is installed onto the interior of the glass roof with […]
Sarah Lee-Jones
3 hours ago

Tesla continues to leverage its in-car notification system to alert owners to charge their vehicles, when there’s a chance electrical grids may be impacted by weather conditions. Full Self-Driving (FDS) beta tester, Chuck Cook, shared a message he received in his Tesla on Tuesday. “In the next 48 hours, a storm is forecast to make […]
Sarah Lee-Jones
5 hours ago