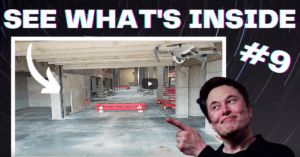 While Tesla’s Gigafactories in Berlin, Germany and Austin, Texas are on their way to completion, it’s been exciting to see them develop over time.

In a breakthrough video released Sunday by YouTube channel Teslair, we get an inside look (literally!) at Tesla’s Gigafactory Berlin progress, with the help of a 4K drone flying into what exists of the site’s first full building.

The footage, unlike any other Gigafactory footage we’ve seen yet, shows the drone flying into the inside of the building, just after poking around the still-outdoor parts of the build.

The video was filmed after hours and no employees were on site at the time, Teslair explained to Tesla North.

We can see that Tesla’s factory is not yet complete, though it has mostly now been covered by the first layer of a roof, making it an enclosed space. The video also shows the outskirts of the site’s forested area, where Tesla was recently ordered to stop developing by a German court.

You can see the full look inside Tesla’s Gigafactory Berlin, courtesy of Teslair, below:

As Tesla’s factories press on toward completion, set for mid-2021 for factories in both Berlin and Austin, the world inches closer to sustainable transportation – a shift which could not come soon enough, with our world on the cusp of climate crisis.