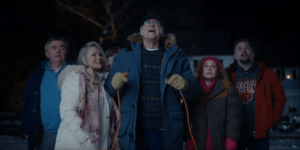 ‘Tis the season for National Lampoon’s Christmas Vacation – and for the Ford Mustang Mach-E, according to a new ad starring both.

The Ford Mustang Mach-E is now available at showrooms across the US. With an Environmental Protection Agency (EPA) rated range of up to 270 miles, Ford is hoping that future EV customers will buy from them.

As legacy automakers like Ford, Toyota, Volkswagen, and Hyundai try to keep up with the world’s shift to EVs, Tesla has a major leg up. While none of these legacy car manufacturers have a line of EVs out like Tesla, with perhaps Volkswagen being the closest, it’s unclear what the future of these traditional auto brands will be.

Whether Ford can save its own brand with the Mustang Mach-E is unclear. But one thing that is crystal clear is that the age of sustainable transportation is coming, and quickly at that.