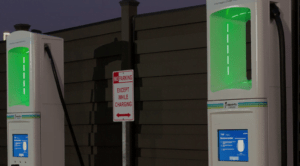 While the zero-emission vehicle charging infrastructure in most countries throughout the world remains a major barrier to the mainstream onset of electric vehicles (EVs), many companies are working hard to establish charging solutions to counter the dilemma.

Electrify Canada has opened its first two charging stations in the province of Quebec, Canada, details a spokesperson to Tesla North.

The news comes just a month after Quebec’s announcement of a 2035 ban on the sale of gas-powered vehicles, a sentiment mirrored by California and a handful of other government entities throughout the world.

Rob Barrosa, COO at Electrify Canada, said in an emailed statement to Tesla North, “We are thrilled to be able to offer a premier charging experience to Quebecers with our new station at the Premium Outlets Montréal.”

He continued, “Quebec is such an important market for electric vehicles, and we are eager to expand our services throughout the province to better support the growing local EV community.”

The company’s planned charging stations to be built in 2021 will be located in Drummondville, St-Romuald, Repentigny, and Sherbrooke.

As the world continues on the path towards sustainable transportation, the expansion of the charging network will remain a critical element in the next several years. And by 2035, we just might have the support we need to mainstream EVs.