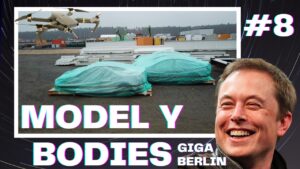 Tesla’s global expansion operations are well underway, and it’s exciting to see them all come together, no matter how slowly.

Recent rumors of Tesla’s Gigafactory Berlin receiving a number of Model Y bodies came to fruition earlier this week, as depicted in a drone video shared by YouTube channel Teslair. The video shows a number of shots from the construction site in Brandenburg, wrapping up with some shots of what appear to be four Tesla Model Y bodies as covered in protective wraps.

While the European market is still receiving imported Model 3 units as its only offering from the electric vehicle (EV) giants, this may be an indicator that Tesla will soon begin working towards its production facility needs, in order to begin delivering the Model Y to European customers upon completion of the Berlin factory – expected summer 2021.

Giga Berlin-Brandenburg will be the first to use our new structural pack architecture, 4680 (world’s most advanced cells, made on-site), both front & rear body castings & advanced paint shop. Warning: with so much new technology, production timing is naturally harder to predict.

Tesla CEO Elon Musk weighed in on the original rumors, shared by Tesmanian, saying that production timing could sometimes be difficult to predict with the amount of newer technology that goes into the new Model Ys – specifically, the inclusion of the 4680 tabless battery cells, which will be made on-site at Giga Berlin.

You can see the full video from Teslair below shared with Tesla North, complete with updated shots of Gigafactory Berlin’s recent progress.