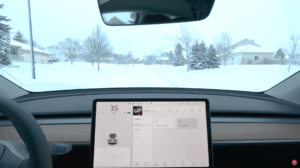 We’ve now seen a handful of snowy, wintry drives in a handful of different Tesla vehicles, though none have depicted quite the same depth of snow that many Canadians are used to seeing all winter long.

In a video uploaded by Tesla Canuck, the Model Y owner documents taking his car for some deep snow driving in roughly 15 centimeters of snow. The host shares that he has purchased the stock option for all season tires, in spite of saying they “don’t appear to be very great in winter weather.”

Ultimately, the host seems to come to the conclusion that anyone hoping to drive their Tesla Model Y a lot in the winter should just purchase winter tires. Along with his discussion of the tires, the host also goes on to do a hard breaking test, an icy hill test, as well as a regenerative braking test in icy conditions.

The host uses Continental ProContact 255/45R19 tires, and, ultimately, seems to advise viewers to go with the winter option if they’re wanting anything more than “adequate” performance.

Still, for the average user, he says that the all-season tires would be a decent choice, even suitable for snowy environments such as this – owners just may have to take it a little slow if they go with an all-season tire option.