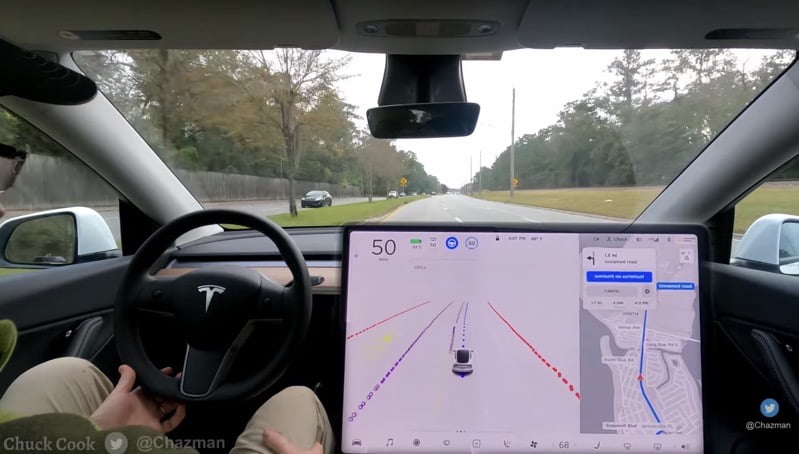 Cook says while the release notes are the same, driving impressions show ‘creep’ for unregulated left turns appears to be slightly better, but overall another solid update.

It’s nice to see Cook keep testing FSD beta on the same roads and intersections to see improvements over time.

“I’m very impressed so far,” says Cook of the update, which was still able to cautiously approach speed bumps and slow down before proceeding.

However, FSD beta still is in its early stages, as during some tricky intersections and stop signs, Cook did have to take over, as he should, in any potentially dangerous situations. But Cook believes “it’s obvious” Tesla is doing a good job of improving on left turns, based on feedback from beta testers.

FSD beta is expected to expand outside of the United States for the first time soon, with CEO Elon Musk previously sharing he was hopeful Canada might get the beta in December.

With Tesla’s regular software updates come gradual improvements, and one new version builds off of the automaker’s recently improved navigation system in its vehicles. Tesla added suggested destinations in its software update version 2022.28.2, as detailed in a report on Wednesday from Not a Tesla App. In the report, the publication notes a user named […]
Peter McGuthrie
59 mins ago

As Tesla continues with plans to open its Superchargers to non-Tesla vehicles, the automaker plans to shift its charging rates and times at certain locations. Tesla is updating its charging rates at select Supercharger locations starting on Wednesday, September 28, according to tweet spotted by @Whole Mars Blog. In the screenshot, Tesla says that users […]
Peter McGuthrie
1 hour ago

Tesla’s Elon Musk is preparing to head to trial with Twitter next month, though another court battle shows the billionaire entrepreneur calling out a federal agency for allegedly stifling his free speech in a separate case. Musk’s lawyers are claiming that the Securities and Exchange Commission (SEC) has imposed a “muzzle” on the CEO’s speech […]
Peter McGuthrie
2 hours ago